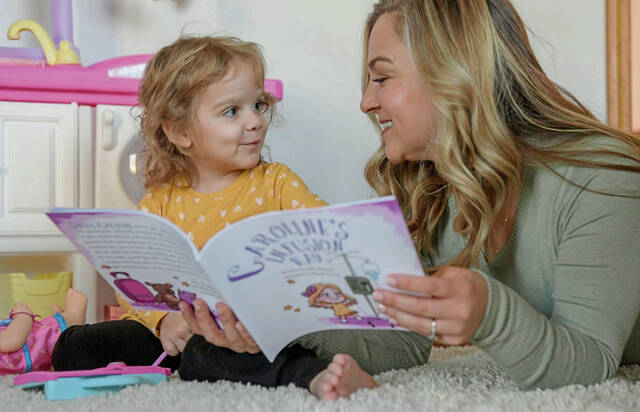 
This is the story of a little girl in a yellow polka dot dress.

Her name is Caroline.

Through the powerful words and colorful pictures on the 33 pages of “Caroline’s Infusion Day,” the reader is taken through a day at UPMC Children’s Hospital of Pittsburgh Infusion Center in Lawrenceville.

Caroline, who turned 4 on Nov. 26, has juvenile dermatomyositis, a rare and life-threatening autoimmune disease. Her treatment includes IVIG (intravenous immunoglobulin) every six weeks. Caroline Culver, 4, works at printing her name with help from her mother Kelly Brennan Culver.

It’s administered slowly through an IV and is meant to boost Caroline’s immune system and calm the inflammation in her body. IVIG is a blood product prepared from the serum of between 1,000 and 15,000 donors per batch.

According to the Cure JM Foundation, JDM is a rare and life-threatening autoimmune disease, in which the body’s immune system attacks its own cells and tissues. Weak muscles and skin rash are the primary symptoms.

There is no cure for the disease and currently no FDA-approved drugs to treat it. Doctors are using medications that have been approved for other diseases such as arthritis.

When Caroline was first diagnosed, her mother Kelly Brennan Culver, of McCandless, was unable to find a lot of information about the condition.

She decided to write a book about her daughter’s medical journey.

The former WTAE-TV reporter, now a social media influencer and blogger, chronicled the experience through jotting down notes, taking pictures and recording videos.

A paperback, “Caroline’s Infusion Day” costs $12.99. It’s available at the University of Pittsburgh bookstore in Oakland, as well as online at Amazon, Target and Barnes and Noble. People can also purchase a copy through Brennan Culver’s website. Close to 400 books have been donated. Brennan Culver has been sending books to families she’s connected with through the Cure JM foundation.

Brennan Culver wanted to help people understand what happens with an IV infusion. She wanted the book to be serious, but also uplifting.

“For families with medically fragile children, I hope they feel a joyful connection to this book – that they are not alone, they are brave and that they feel ‘seen,’ ” Brennan Culver said. “For those who have not faced a medical battle, I hope this book is educational for them and helps them to understand what some children go through.”

For the illustrations, Brennan Culver invited her niece Elleigh, 16, of Thornville, Ohio. The original plan was for Elleigh, an artist, to come to an infusion session, but the pandemic prevented that.

“Elleigh created the illustrations based on cellphone images,” Brennan Culver said. “She conveyed the emotions without physically being there to see it. I was blown away.”

Her niece appreciates the experience.

“I have seen how strong of a mom Kelly is and I aspire to be that one day,” Elleigh said. “Seeing and touching the book in real life can’t compare to what it looked like on a computer screen. The colors were so much more vibrant, and the words and pictures seem to jump off the page. I get emotional reading it. I am forever connected to Caroline. She always tells me, ‘I love your pictures.’ Caroline is the sweetest.”

The book takes readers through Caroline’s ride to the hospital, interacting with a nurse, being pinched with a needle, and making tea for her doctor Dr. Daniel Kietz. He is pictured kneeling on the floor with Caroline, a teacup in his right hand.

“I like to play with my doctor in the ‘hopital,’ ” said Caroline, whose favorite color is yellow. “I bring him chocolate.”

The final page has Caroline resting at home. She has a doll called “Baby Achoo,” that she cares for just like her mom does for her.

Brennan Culver said the response has been wonderful. She’s heard from people whose children have asked to read it again and again — both those with medical conditions and without.

Everyone has some difficulty in life, Brennan Culver said. Her father-in-law, Paul Culver Jr., sent pictures of himself with an IV from his cancer treatments so Caroline could see she’s not alone.

Lily, a first grader, is in the book.

“Lily was excited to read it to her class,” said Brennan Culver, who brought books to the school library. “After reading it, her classmates cheered for her.”

Brennan Culver has ideas for a second book but wants to enjoy this one for a while.

“If she wants to do another book, I would be completely up for that,” Elleigh said. “ I have learned so much through Caroline. She is such a strong little girl. I am not so sure I could have gone through what she’s going through when I was her age.”

Caroline cries when she knows it’s time to go for treatment. But she packs her toys in a suitcase to take with her because she knows the special medicine will make her feel better.

When Caroline goes for her next infusion in January, she will take the band-aids she always brings for the other patients as well as something else in her suitcase.

JoAnne Klimovich Harrop is a Tribune-Review staff writer. You can contact JoAnne at 724-853-5062, jharrop@triblive.com or via Twitter .

Can Dogecoin Reach $1? | The Motley Fool