The biggest market moments of 2021 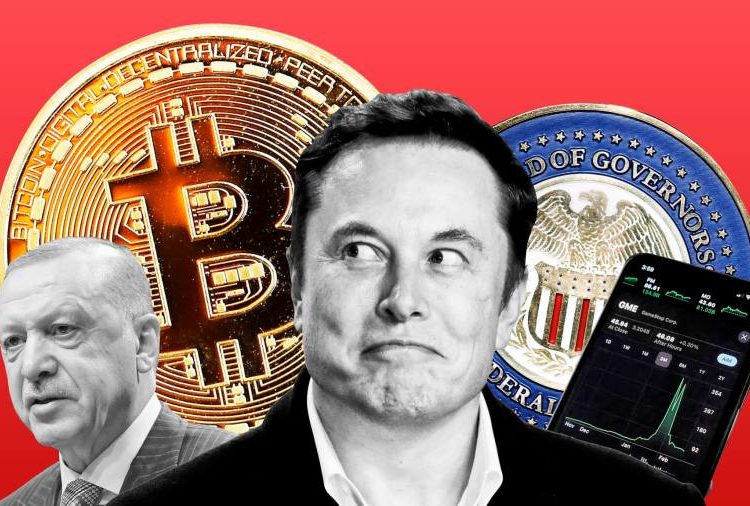 
This has felt like a long year in financial markets, studded with events that offered insight in to the rapidly changing nature of trading and investment. From across the Financial Times’ markets team, here is our pick of the standout moments of 2021.

GameStop: revenge of the nerds

In January, US stock markets were transfixed by the outsized trading volumes and surging share prices of unremarkable established companies such as consoles retailer GameStop and cinema chain AMC.

What began as a discussion on untapped value at GameStop on the Reddit website months earlier morphed into a crowdsourced effort to squeeze out the short position held by a hedge fund, Melvin Capital. The momentum, fuelled by social media memes, flooded through the retail market. Some brokers were forced to curb trading. Robinhood, a popular broker for day traders, required a cash injection from shareholders to withstand the demands placed on it by its clearing house.

Politicians wanted answers to what happened and invited those at the centre of the storm to Washington to explain. They included Robinhood’s Vlad Tenev, Ken Griffin of market maker Citadel Securities and Keith Gill, better known as Roaring Kitty, whose posts on Reddit under the alias DeepFuckingValue kicked off the saga. (He began his testimony by explaining he was “not a cat”.)

Brokers, hedge funds and regulators received a crash course in the power of retail investors on a mission. The incident may lead to market reforms. US regulators are looking at the practice of payment for order flow, in which brokers sell their customers’ orders to market makers, and the two-day period allowed for settling shares may be halved. Philip Stafford

Auctions of seven-year US government debt generally spark interest only among specialists. But on February 25 2021, one such typically humdrum event proved unsettling across financial markets, as the weakest demand on record hit prices across the whole spectrum of Treasury bonds. The five-, seven- and 10-year notes all fell sharply in price. Researchers at the Federal Reserve called it a “flash event”.

The flare-up reflects one of the most pressing investor concerns of the year: inflation. At the time, fund managers were starting to realise that consumer price rises were back with a vengeance — a perennial threat to the bond market, which pays out fixed returns. But it also illustrates that the world’s most important market is not as structurally robust as investors might hope.

In an echo of March 2020, the blow-up happened because liquidity — the ability of sellers easily to find buyers, and vice versa — evaporated. It was an extreme example of a long-running issue: since the financial crisis the traditional providers of liquidity, a group of 24 Wall Street banks, have pulled back because of higher costs associated with post-2008 capital requirements. Those banks, in their reduced role, as well as the hedge funds and high-frequency traders that have stepped into their place, have tended to withdraw in moments of market volatility.

Reforms have been proposed but not enacted, suggesting the risk of dramatic swings in price when the Fed tightens monetary policy in 2022. Kate Duguid

Archegos fails to keep it in the family

The idea of a so-called “family office” managing the wealth of successful entrepreneurs for the benefit of offspring and charitable causes sounds rather quaint. In March 2021, however, several hard-nosed banks received a brutal reminder that some of these investment houses — together worth some $6tn — take risks that would make the most serrated hedge fund manager wince, when Bill Hwang’s Archegos Capital Management imploded in spectacular style.

Hwang, a former protégé of fabled hedge fund group Tiger Management, had built up a vast pile of leverage with a clutch of banks to supercharge bets on a small number of stocks. Banks had seemingly been happy to help despite Hwang’s having been barred from US markets in 2013 over allegations of an insider-trading scheme.

When one of his more recent bets, on ViacomCBS, turned sour, that set off a chain of events that left banks including Credit Suisse and Nomura with billions of dollars in losses. The Swiss bank’s internal report in to the saga makes for brutal reading.

Luckily, damage was limited to the banks rather than leaking across financial markets, but the episode sparked a rethink among banks over how to treat these clients and how much leverage to extend. Katie Martin

Bitcoin prices were uncharacteristically calm in the first quarter of the year, rising to a series of new record highs that culminated at just below $62,000. But the smooth ride came to a halt in May when China’s crackdown on the cryptocurrency and its production, or “mining”, sparked the first serious crash of 2021.

The price of bitcoin collapsed as much as 30 per cent on May 19, hitting a low of $30,000 in chaotic trading conditions following a warning from Chinese authorities of tighter curbs ahead. A public acceptance by Tesla chief and crypto cheerleader Elon Musk of the industry’s environmental impact added to the declines.

The sell-off wiped out billions of dollars worth of positions placed by retail investors and highlighted a series of structural weaknesses in the digital coin market, as some of the largest trading venues suffered glitches during the price collapse.

Still, you can’t keep a crypto coin down, it seems. Prices resumed their upward trajectory in late September when investors started to price in the launch of futures-based bitcoin exchange traded funds in the US. The launch of these contracts subsequently pushed bitcoin to a new all-time high in early November.

In early December prices stumbled hard again, this time due to a wobble in traditional markets. That demonstrated the links between Wall Street and cryptocurrencies, due to the growing sway of large investors in digital markets. Eva Szalay

China’s education sector was one of the darlings of Wall Street. Companies such as New Oriental and TAL Education had come to be worth billions of dollars after highly publicised US stock market flotations. So when Beijing effectively outlawed swaths of the country’s for-profit education industry in July 2021, the short-term market impact was brutal. One group, Gaotu Techedu, now has a market valuation of under $650m, compared to over $12bn at the end of 2020.

Beijing’s measures came as part of a wider effort to make education more affordable as part of president Xi Jinping’s drive for common prosperity. But that raises questions over whether juicy growth prospects across corporate China are countered by the capacity of the government to overhaul entire business models overnight.

Volatility arising from the education sector was soon overshadowed by another set of government reforms related to common prosperity — a crackdown on leverage across the real estate sector.

Evergrande, the world’s most indebted developer, has since the summer been engulfed by a liquidity crisis that eventually resulted in a default in early December.

Still, China continued to draw in foreign money throughout the year. Global holdings of Chinese stocks and bonds rose $120bn in the first nine months of this year from the end of 2020. Thomas Hale

Natural gas supplanted crude oil as the world’s most important commodity in October as prices surged to unprecedented levels and the world scrambled for scarce supplies.

The crunch was particularly acute in Europe, which has become increasingly reliant on imports. Futures linked to TTF, the region’s wholesale gas price, hit a record €137 per megawatt hour in early October, rising more than 75 per cent. In Asia, spot liquefied natural gas prices briefly passed the equivalent of more than $320 a barrel of oil in October. (At the time, Brent crude was trading at $80).

A number of factors contributed, including rising demand as pandemic restrictions eased, supply disruptions in the LNG market and weather-induced shortfalls in renewable energy. In Europe, this was aggravated by lower export volumes from Gazprom, Russia’s state-backed monopoly pipeline supplier. That situation remains on a knife edge.

European gas storage is now only 66 per cent full — a level it would normally reach in January.

With delays to the Nord Stream 2 gas pipeline from Russia to Germany, analysts say the European gas market is only a cold snap or supply disruption away from another price spike. Neil Hume

Tesla rules everything around me

Little divides opinion more in finance than shares in Tesla, the electric carmaker run by Elon Musk, which in October 2021 finally broke into the ranks of the five most valuable American companies, with a market capitalisation of over $1tn.

In October alone, Tesla added $446bn of stock market value, equal to more than two McDonald’s. But even that understates the broader impact of what is akin to a “Tesla-financial complex”.

Unprecedented option trading volumes — especially call options that let investors bet the stock will rise — have been an important driver of Tesla’s growing financial heft. In the autumn of 2021, the nominal trading volume of Tesla options exploded to $241bn a day, as much as all other S&P 500 options combined. Amateur investors are keen punters here.

All this has become a headache for the broader stockpicking industry, where relative performance is often dependent on whether investors hold…

Russia to Decide Between Full Ban and Legalization of Crypto Investments, Trade –

A Bitcoin Wallet for the Masses

A Bitcoin Wallet for the Masses