Altcoins keep balances in red, Avalanche and Solana at the top of the weekly top 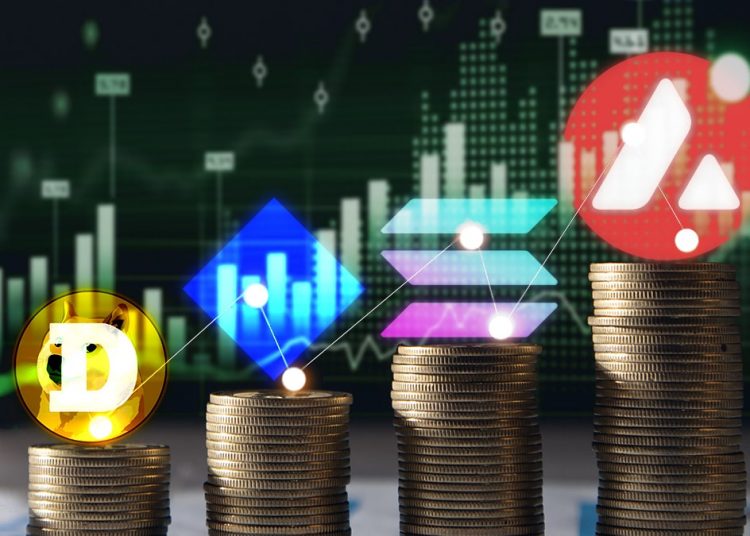 
From December 13 to 19, 2021, the market remains with balances mostly in red, similar to the previous week. This time around 95% of cryptocurrencies lost value, while the few altcoins that register gains have had increases of more than 30%, according to Live Coin Watch statistics.

The top cryptocurrencies is headed by avalanche (AVAX) whose rise gave it a position in the top 10 by market capitalization; Y Solana (SOL), which launched a new fund to finance the development of blockchain-based games.

The top closes with Waves (WAVES), that it is advancing in its plans to create pools of liquidity for its new token; Y Dogecoin (DOGE) again fueled by ads from billionaire Elon Musk.

The price of bitcoin has remained on the ups and downs after the slight recovery it experienced at the end of last week, when it hovered around $ 50,000. During this week the value of the cryptocurrency has been mostly down, reaching figures close to USD 45,000.

The average weekly loss of BTC is estimated at 4.8%. This, despite the rebound experienced on December 15 due to the announcements of the Federal Reserve (the Fed) of the United States about its plans to reduce aid as soon as possible, and a possible increase in interest rates in 2022.

As reported in CriptoNoticias, based on a Glassnode report, bitcoin derivatives markets saw significant drops in open interest in the last two weeks causing a drop in the spot price.

The cryptocurrency traded between $ 3,700 and more than $ 4,166, while users of the Ethereum network continue to pay high commission fees. This, even when a decrease in them was expected with the implementation of the EIP-1559 improvement proposal, which last August introduced a new scheme for fee payments on the blockchain.

On this subject, the Glassnode firm points out that the average usage of Ethereum commissions reached its lowest point in 4 months. The figure would be a sign that users are looking for other alternative platforms, with lower tariff costs.

Other relevant cryptocurrencies by market capitalization register ups and downs. Cardano (ADA), depreciates by more than 4%; while litecoin (LTC) loses 1.8, polkadot (DOT) falls by 12%, and XRP experiences a slight increase of 0.4%. Meanwhile, dogecoin (DOGE) gains 2% and avalanche (AVAX) more than 30%. These last two are in the weekly top.

Avalanche returns to the top 10 by market capitalization

On December 14, it was announced that the Avalanche blockchain becomes the seventh network with native support for stablecoin USD Coin (USDC).

The announcement was made by Circle, the company behind USDC, on Twitter, stating that the partnership with Avalanche will allow users to don’t be forced to bridge or swap the stablecoin from Ethereum seeking to reduce the cost associated with gas (rates).

They note that Avalanche is fully compatible with Ethereum smart contracts and its transaction fees “are a fraction of those typically paid in Ethereum.”

Another of this week’s announcements linked to Avalanche is the fact that the network’s native cryptocurrency, AVAX, will be supported on the Kraken exchange. starting next December 21. Also digital asset custodian company BitGo reported that will support AVAX tokens through its storage services and protection of cryptocurrencies.

Shortly after knowing this information AVAX began to raise its price substantially, on a steady rise that took its value to a high of $ 116 on December 18. Weekly growth reached more than 30%.

With the rise of these last days AVAX it was positioned between the ninth and the tenth place among the main cryptocurrencies by market capitalization, returning to the place it had occupied at the end of November and that it lost after a market correction.

As of press time, the capitalization of AVAX is USD 27,082 million and the daily trade volume is USD 934 million.

The price of AVAX peaked at $ 116 on November 18, ranking in the top 10 by market capitalization. Source: Live Coin Watch.

Solana Ventures, the strategic investment arm of Solana Labs, announced this week an alliance with gaming startup NFT Forte, and Griffin Gaming Partners. to collectively invest USD 150 million in Solana’s Web3. The information was released on December 14 through a tweet from Phil Sanderson, CEO of the equity investment firm Griffin Gaming Partners.

According to the publication, the aim is to offer support to the creators of decentralized Web3 games that are operating on the Solana blockchain, most of which use non-fungible tokens (NFTs).

This is the second fund created by Solana Ventures, as last month, the company partnered with the FTX exchange and the Lightspeed trading platform to create a USD 100 million co-investment fund, also for web games3.

The news about the new fund led to the almost immediate rise of the cryptocurrency SOL, which rebounded from a drop it experienced on December 14 when it had hit a low of $ 149. The token went from that low to a peak of $ 187 on the 16th of this month.

SOL has appreciated by more than 8% in seven days. The market capitalization is USD 52,878 million and the daily trade volume is USD 1,468 million.

SOL peaked at $ 187 on December 16 following the announcement of the fund’s launch. Source: Live Coin Watch.

Last December 2 Waves announced the launch of a new token, called WX, intended for the development of the DeFi environment of the blockchain, the first WX tokens began to be unlocked on November 25 on the decentralized exchange Waves.Exchange (formerly Waves DEX) through an initial decentralized exchange offering (IDO) on the that 50 million tokens were sold in 29 hours.

In the course of this month, the DEX has been boosted by the increase in WX’s liquidity funds, which reached more than USD 140 million according to the statistics of Sasha Ivanov, founder of the project.

For this December 15 the Waves team announces the start of the gWX stakeout function Through which investors in liquidity funds would obtain a 5% stake in the WX issue, redistributed in different pools.

In order to be eligible, interested parties must block their holdings in WX in order to receive gWX, which represents a means of boosting voting power on the platform.

Regarding the creation of gWX, in a recent “ask me anything” session, Ivanov explained that the goal of the IDO was not profit, but more investor participation in the ecosystem.

The medium of the development of this plan, WAVES posted an average rise of more than 2%. The top native cryptocurrency peaked at $ 19.56 on December 17. The market capitalization is USD 1.68 billion and the daily trade volume is USD 77 million.

Waves’ price peaked at USD 19.5 on December 17 and its growth was more than 2%. Source: Live Coin Watch.

On December 14, billionaire Elon Musk again took to Twitter to give new impetus to the meme cryptocurrency, Dogecoin, by reporting that the electric car company Tesla will accept payments with DOGE for some of its products on a test basis.

The company will accept dogecoin as payment for merchandising (items for brand promotion) whose costs range between USD 50 and USD 1,900. So far it has not been specified which of the list of Tesla promotional items can be purchased with DOGE.

As it was expected, Musk’s tweet generated an immediate price hike of the cryptocurrency, which that same day went from USD 0.159 to USD 0.211. Although this figure fell rapidly in the last hours of December 14, the following days DOGE remained at higher values ​​than it recorded before the billionaire’s message.

From December 16 to date, the price of DOGE has remained more or less stable at USD 0.17 and the average weekly growth was 1.17%. At press time, the market capitalization is USD 22.8 billion and the daily trade volume is USD 433 million.

The value of DOGE rose to a high of $ 0,211 on December 14, the same day as Elon Musk’s announcement. Source: Live Coin Watch.

Read More:Altcoins keep balances in red, Avalanche and Solana at the top of the weekly top

Celebrities that rode the crypto wave in 2021