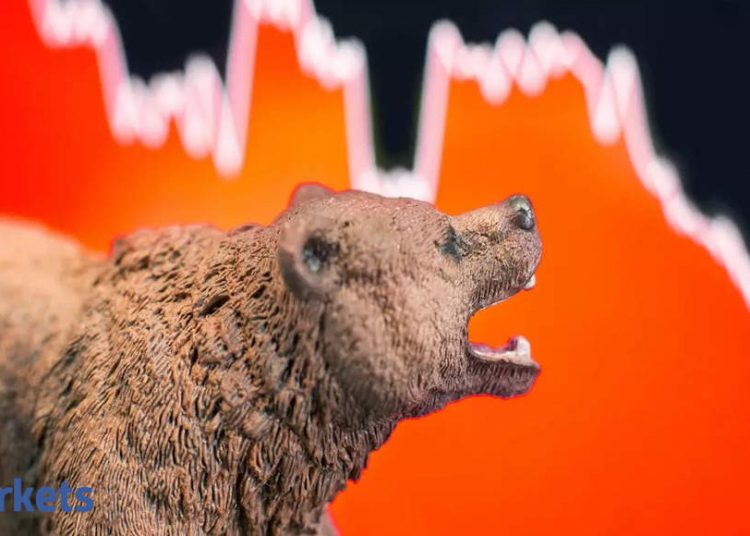 NEW DELHI: Amid a worsening pandemic in the Western world and weakness in global markets, Indian stocks slumped further on Monday. Down 10% from their record highs, both Sensex and Nifty have now entered the correction zone.

In the 50-share pack Nifty, Cipla was the biggest gainer, up 2.17 per cent. Power Grid was among other gainers.

JSW Steel was the top loser in the pack, down 4.08 per cent. Tata Steel, Bajaj Finance, M&M, SBI, Tata Motors, BPCL, Hindalco Industries and Grasim Industries were other stocks that traded in the red.

Dollar at a high: US Federal Reserve officials openly spoke of hiking rates as soon as March and of starting to run down the central bank’s balance sheet in mid-2022. The Fed’s hawkish turn, combined with safe-haven flows, underpinned the US dollar index near its best for the year at 96.674, following a 0.7 per cent jump on Friday.

Virus threat intensifies: US health officials urged Americans on Sunday to get booster shots, wear masks and be careful if they travel over the winter holidays, as the Omicron variant raged across the world and was set to take over as the dominant strain in the United States.

Lockdown in Europe?: The possibility of more COVID-19 restrictions being imposed ahead of the Christmas and New Year holidays loomed over several European countries as the Omicron variant spread rapidly. The Netherlands has already announced a lockdown.

Broader markets
Broader market indices were trading lower, underperforming their headline peers in morning trade. Nifty Smallcap was down 3.24 per cent while Nifty Midcap fell 3.09 per cent. Broadest index on NSE, Nifty 500, was down 2.22 per cent.

Most millennial millionaires have at least 50% of their wealth in crypto: survey

The crypto crash could be costing NFL stars like Trevor Lawrence big money, according to The Action Network. Pro...