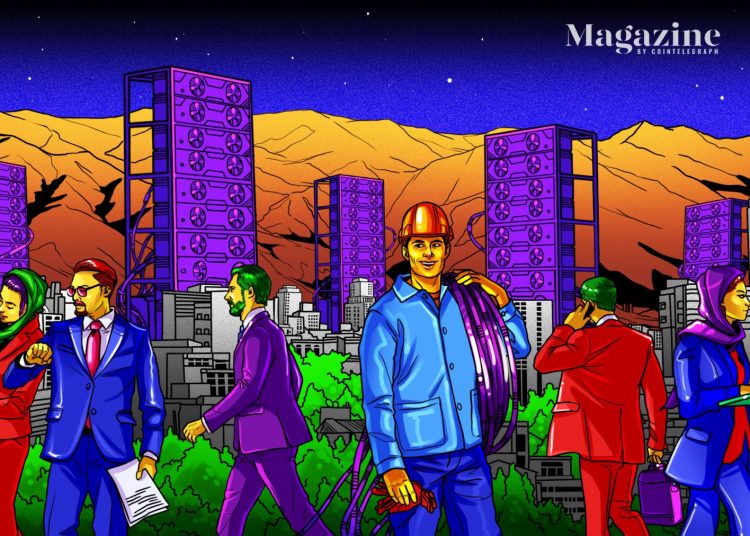 
ViraMiner is an Iranian company that sets up Bitcoin mining farms and maintains them. It has two offices in western Tehran, located in separate adjacent buildings.

When Magazine visits, its old office is busy on a Monday afternoon. This place is now officially dedicated to its repairing services alone.

Mining devices are stored upon each other in yellow, green and red shelves raised against a wall facing the company secretary’s desk. Across the entrance, there is a busy repair room where devices are opened. Power supplies, hash boards and control boards are passed around, discussed and modified.

Bitmain Antminer and MicroBT Whatsminer are a specialty for repairs by the company, whose personnel are all young tech enthusiasts. Mina Jahanbakhshi, one of the three female employees present there, gives a tour around the office and leads me to a room next to the repair section, which is being prepared for new employees who have been hired to help the company keep up with its growing demand.

Electricity consumption peak in Iran’s hot summer has just passed and a presidential ban on power-intensive crypto mining has recently been lifted. The company, therefore, expects busy days ahead.

White new desks are put next to a wall toward the end of the quiet room and the extra repairing equipment has yet to arrive.

“The waiting period for repairing equipment is currently two weeks,” she says. “We are adding new personnel to speed up the repairing process.”

Mining has grown significantly in Iran over the past few years.

“People are getting more familiar with mining,” Jahanbakhshi says. “It’s an interesting and attractive field. It is growing worldwide, and likewise in Iran.”

As another sign of a growing business, the company is preparing an additional office in a separate building nearby. The air in the under-construction workplace is teeming the odor of fresh paint.

Omid Alavi, ViraMiner’s CEO, is having a meeting a few steps from construction workers doing plasterwork on the walls.

There is no place to have an interview, so we move to the neighboring apartment where an office for another company is being prepared. Alavi exchanges a few jokes with the people in the neighboring office. A person unfamiliar with their relationship would assume the two offices belong to the same company.

“These are our competitors,” Alavi says jokingly as we walk past a desk across the entrance. “The crypto community is really small.”

Alavi tells Magazine that he established the company with two other partners back in 2016.

“In 2017-2018, the Bitcoin hype gained momentum. Many got interested in cryptocurrency and this led to the building of many mining farms in Iran. We put our focus on the setting up and the maintenance of the farms. We generally became a specialized company in this sector.”

Despite ups and downs, ViraMiner has seen overall growth in recent years.

“In the past four to five years, the number of our personnel has increased to nearly 70. We created a specialized repair services unit, where 16-17 trained personnel repair mining equipment,” he says.

“We had some of our staff do courses in China’s Bitmain Technologies Ltd and MicroBT. We also invited experts from China to train our staff here.”

ViraMiner was initially established as an underground company. But, in 2019, when mining was recognized by the authorities as an industry, Alavi and his colleagues received permits to be an authorized company active in the field.

“Simultaneously, we have tried to help the government make regulations for mining,” he says.

According to the Iranian Mining Association, two-thirds of Iran’s Bitcoin mining is unauthorized.

Iran accounts for an estimated 4.5% to 7% of the global Bitcoin hash rate. The extensive reach of the industry has prompted the Iranian government to increase its supervision of mining.

However, the government has concerns with the industry due to the sector’s consumption of Iran’s heavily subsidized electricity, as well as a sneaking suspicion that illegal miners are evading taxes and duties.

Moreover, the government has shown a desire to turn mining into an opportunity to compensate, at least in part, for an almost-complete embargo on its banking and oil industries due to international sanctions.

Blockchain analytics firm Elliptic said in May that Iran’s Bitcoin production had hit revenues close to $1 billion a year at the country’s then-level of mining.

The former head of the Central Bank of Iran (CBI) Abdonasser Hemmati said in March that authorized farms will need to deposit their mined Bitcoin on exchanges specified by the CBI. Importers can then use Bitcoin as a source of foreign currency to pay for the goods purchased from overseas sellers.

But, despite many efforts to make laws efficient and clear, the regulations have still failed to satisfy mining businesses.

Miners complain that the government’s tariff scheme — paying the export price for electricity — is unreasonable and that it makes mining less attractive in Iran.

Regulations, especially those proposed by the CBI, are unclear and not yet operational, miners say.

“So far, the government hasn’t created operational infrastructures for this,” says Alavi.

According to Shijieshuo, Iran has halted all local Chinese Bitcoin mining companies that hold legal licenses on January 14. According to statistics from the Bitooda website, Iran is the third largest Bitcoin holder in the world after the United States and China, 8% of total. pic.twitter.com/fT7S9xrHPz

“The government legislation puts forth two options for Bitcoin miners. They say either you can import products under the supervision of the Central Bank and be exempt from taxes or if you want to keep your Bitcoin, you need to pay your taxes — even though tax instructions for mining are unclear, too.”

Javad, a Tehran-based mining expert, tells Magazine he believes that clear regulations are crucial for the growth of the mining industry in Iran. He requests anonymity due to security concerns in Iran over speaking to foreign media, but he’s a hardware engineer with five years of experience in Iran’s mining industry.

“Mining is very attractive in terms of its revenue in countries like Iran, where income per capita is relatively low and there is a struggle with a high inflation rate,” he says,

“The role of regulations is utterly important to assure the robustness of the industry and to keep it from slipping into the shadows. If we have regulations that are a win-win for both the government and the businesses, miners would definitely be willing to come out of the shadows. Though, at the moment, the Energy Ministry has a one-sided view of this issue.”

He hopes that the government would recognize the potential in the sector for creating jobs and prosperity in Iran’s ailing economy.

“Bitcoin mining could be used by Iran to evade sanctions. But, if we decide to use this potential, we need to accept it completely. It means that Iran should have the required regulations to create domestic mining pools in case international pools decide to block Iranian miners,” he says.

“If Iran wants to use transactions on Bitcoin’s network in favor of its national interest, it needs to pay special attention to mining and make certain local rearrangements.”

Despite the government’s newly found use for domestically mined Bitcoin, Iran’s poor power infrastructures have forced it to seasonally unplug farms that are on its watch.

In late May, authorities banned crypto mining for nearly four months as the country faced major power cuts in many cities.

This led to a drop in revenue for many mining businesses, including that of ViraMiner.

“We went into seasonal hibernating for four months,” Alavi says laughing. “We didn’t have much revenue through unauthorized miners either because the government was putting so much pressure on them and they were mostly scared off.”

The report said that the seized miners would have consumed 624.7 megawatts of electricity.

The Energy Ministry says Iran’s electricity consumption can hit a peak of 66 gigawatts in the summer. This is much higher than the country’s 55-gigawatts power generation capacity.

Meanwhile, according to Iran’s Blockchain Association, the overall mining consumption could be less than 1 gigawatt. This includes more than 600 megawatts consumed by unauthorized mining alongside more than 300 megawatts related to authorized farms.

“Mining accounts for less than 10% of electricity issues and power cuts in Iran,” Javad explains.

“The Energy Ministry has not been able to increase the number of its power plants. This should have taken place as part of a plan to raise power generation capacity to keep pace with annual growth both in domestic and industrial electricity consumption.”

He says that the mining industry has become a scapegoat for poor power infrastructures, as well as mismanagement on the part of the government.

“Many private power plants have not been able to undertake maintenance and overhaul operations on their worn-out facilities. This is because their payments have been long overdue,” he says, referring to payments due from the state. “So, they are not able to operate at full capacity.”

While authorities have focused on big farms operating at industrial and agricultural facilities, small-scale mining has had much of a chance to evade the government’s radars.

Home miners, in particular, are more difficult to trace.

Will Canada really be a “magnet” for cryptocurrency trading?

Cryptocurrency Is a Hot Gift Idea This Year. Here Are 5 Things You Should Think About if

Cryptocurrency Is a Hot Gift Idea This Year. Here Are 5 Things You Should Think About if