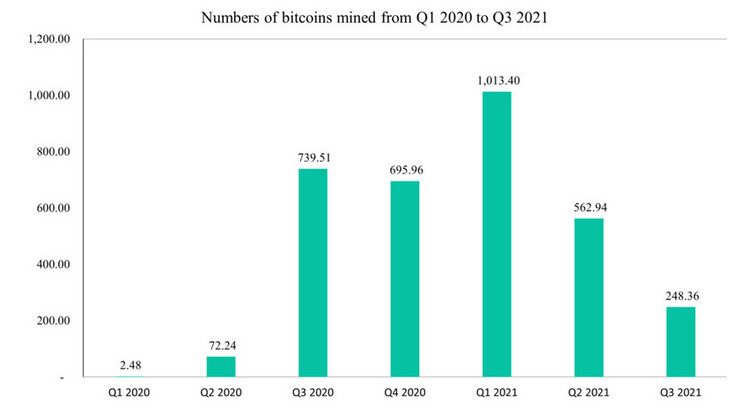 OPERATING AND FINANCIAL REVIEW AND PROSPECTS

e are a bitcoin mining company with mining operations in the United States and Canada. We commenced our bitcoin mining business in February 2020. Our bitcoin mining operations, hosted by third party hosting providers, use specialized computers, known as miners, to generate bitcoins, a cryptocurrency. The miners use application specific integrated circuit (“ASIC”) chips. These chips enable the miners to apply greater computational power, or “hash rate”, to provide transaction verification services (known as “solving a block”) which helps support the bitcoin blockchain. For every block added, the bitcoin blockchain awards a bitcoin award equal to a set number of bitcoins per block. Miners with a greater hash rate have a higher chance of solving a block and receiving a bitcoin award.

We operate our mining assets with the primary intent of accumulating bitcoin which we may sell for fiat currency from time to time depending on market conditions and management’s determination of our cash flow needs. Our mining strategy has been to mine bitcoins as quickly and as many as possible given the fixed supply of bitcoins. In view of the long delivery lead time to purchase miners from manufacturers like Bitmain Technologies Limited (“Bitmain”) and MicroBT Electronics Technology Co., Ltd (“MicroBT”), we initially chose to acquire miners on the spot market, which can typically result in delivery within a few weeks. In parallel, we also enjoy strategic relationships with leading manufacturers, enabling us to access ASICs on advantageous terms. On October 7, 2021, the Company contracted to purchase an additional 10,000 Antminers from Bitmain under a Sales and Purchase Agreement (the “SPA”) at an estimated cost of $65 million. These miners are expected to increase the Company’s miner hash rate by approximately 1.0 Exahash (“EH/s”). Pro Forma for the announced purchases, our maximum total hash rate is expected to be approximately 2.603 EH/s.

In October 2020, we commenced our strategy of migrating our mining assets from China to North America. Following the announcement of the Chinese government’s decision to ban bitcoin mining, we immediately suspended our remaining mining operations in mainland China, effective June 21, 2021. Accordingly, we further accelerated our migration strategy that had been ongoing since October 2020. As a result, a greater proportion of our fleet was offline than in the prior quarter, due to more miners being in transit to or awaiting installation in North America. Prior to shipment, we generally refurbish our miners in a facility in Shenzhen, China, to ensure their resilience during transport and operability upon arrival. Miners are securely packaged and shipped by air or by sea, depending on market conditions.

During the third quarter, the Company signed two new hosting agreements in the United States, representing 135 megawatts (“MW”) of additional power capacity. Both are expected to be powered by a substantial component of renewable and/or carbon-free energy, contributing to our ongoing efforts to decarbonize our mining operations.

On July 22, 2021, we signed a 100 MW agreement with Digihost Technologies (“Digihost”) that is expected to be powered by approximately half renewable and/or carbon free energy sources, subject to finalizing our energy procurement strategy with Digihost. This second agreement brings our total contracted hosting capacity with Digihost to 120 MW. Digihost is expected to deliver the first 20 MW of contracted power capacity during the fourth quarter of 2021. The remaining 100 MW is scheduled for delivery during the first and second quarters of 2022.

On August 25, 2021, we signed a 35 MW hosting agreement with Blockfusion USA (“Blockfusion”) that is expected to be powered primarily from zero carbon emission energy sources. As of the date of this report, Blockfusion had completed the first (of four) phases of miner deployments, representing approximately 5 MW of power consumption. The remaining three phases are scheduled for delivery in fourth quarter of 2021 and the first quarter of 2022. During the term of our agreement and for twelve months thereafter, Bit Digital has a right of first refusal to match any bona fide offer from a third party to finance or acquire securities and/or assets of Blockfusion, and to receive a credit or refund of certain expenses incurred in the development of…

I teach cryptocurrency at UC Berkeley’s Haas School of Business. Here are 3 things every