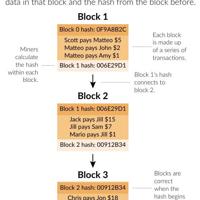 It’s an icy December morning. You stop in your local coffee shop on the way to work to grab your usual morning brew.

The young barista tells you the total. You reach into your pocket and pull out a pile of gold coins and drop them in the barista’s hand.

How would they react? Bewildered, entertained, concerned?

What if I told you that in this lifetime, the reaction the barista would give to you handing them a five dollar bill will be equivalent to sliding over a stack of shiny doubloons?

At an event hosted by the Trulaske Business School on Nov. 10, two professors with a deep interest in the world of online banking made a big prediction: Cryptocurrency is inevitable, and we need to get ready for it.

“Blockchain technology is being applied to law, shipping, contracts, government, health care, and more,” said Scott Christianson, a teaching professor who has been following bitcoin since 2013.

Another prediction: Bitcoin, one of the first and most well-known cryptocurrencies, will not be our next currency. Instead, Ether will be what comes to mind when we think of our finances.

Christianson said crypto’s hold on the future of the monetary banking system is a matter of when, not if. The purpose of their presentation and this article is to unravel this financial force that few fully understand.

Cryptocurrency is a digital currency in which transactions are verified by a decentralized system rather than a centralized authority like the U.S. banking system.

The U.S. and other developed countries use interbank payment systems, a system that transfers funds between two separate banks, that are slow, costly and prone to cyberattacks, according to MU Assistant Professor of Finance Matteo Binfarè.

Bitcoin, the most widely known cryptocurrency, is a peer-to-peer electronic cash system. This means you can transfer money between two parties without needing a financial institution.

This is where people lose trust in crypto. Without a bank, who is preventing double spending of the same electronic cash? Who is monitoring transactions?

“This is where cryptography comes to the rescue,” Binfarè said. “Cryptography is just a branch of mathematics that deals with the secure transfer of data.”

Cryptocurrency uses “proof-of-work” to show the cryptography used on a blockchain. A blockchain is a system where a record of transactions made by cryptocurrency is maintained across several computers that are linked in a peer-to-peer network.

For example, the blockchain for Bitcoin is in an open source program called Bitcoin Core. Anyone with a computer and internet connection can tap into Bitcoin Core.

If you do, that means you’re “running a node.” People who run nodes are validating transactions and blocks. Then there are miners, the people who actually receive Bitcoin because they completed a puzzle

“A miner is a special subgroup of nodes,” said Binfarè in an email. “Not all nodes are miners.”

Cryptography is the study of secure communications techniques that allow only the sender and recipient of a message to unlock its contents.

Like gold prospectors heading west in the 1800s, crypto miners are also seeking fortune. But rather than sifting soil through water, these crypto miners today solve cryptographic equations to get their fortune.

Imagine a student in a math class who does a calculation, they show their work to get full points on the assignment and give it to the teacher. Once the teacher checks the work and determines that the student is correct, the teacher gives them a gold star.

Cryptocurrency operates the same way, only the math student is a “miner” using cryptography and earns cryptocurrency instead of a star.

Both the teacher and the teacher’s act of verifying that the work is the blockchain system.

It is not just the technology that powers Bitcoin, Ether, and other cryptocurrency tokens.

The concept of the hash is where some people’s understanding of cryptocurrency ends. Hashing is what builds the block that an individual miner can add into the chain of transactions.

Hashing is the key to understanding why blockchains are special. A hash is a unique number with specific properties calculated for each block, according to Christianson.

The calculation for the hash of block two is derived from both the hash from block one and the transaction data in block two. Once calculated, the hash for block two can be quickly verified by all the other nodes on the blockchain network.

The calculation for the hash of block three is derived from the transaction data in block three and the hash from the previous block. This process continues as new data blocks are added and are “chained” to each other.

“This linking of a new block to the hash of the previous block is why these systems are called blockchains,” said Christianson in an email.

This hashing and chaining process is what makes blockchains unchangeable.

“Where does the Block 0 Hash come from?” said Christianson. “Every Blockchain has to start somewhere, and that is with the “origin block” which is generated by the creator of a particular blockchain or cryptocurrency at its inception.”

Every 10 minutes or so, a block is created by crypto mining computers by collecting a few hundred pending bitcoin transactions. They are made through the hashing process and turned into a mathematical puzzle.

Miners either do the coding themselves or use Bitcoin mining software that already exists to solve one of the puzzles.

“For the miner to be the “winning miner,” the output string needs to start with a bunch of zeros,” said Binfare. “This measures the complexity of the ‘mathematical puzzle.’”

Mining computers can code ways to expedite the process of finding the hash and thus unlocking the cryptocurrency.

Some people think that it’s all complex mathematical equations that people are creating and solving to receive their Bitcoin on the other end of the chain. It’s not. No calculus or matrix theory by hand is required to get your money.

The puzzles miners solve are called “mathematical puzzles” because cryptography is heavily based in mathematical theory, not because it actually is math.

After a miner uses software to unlock the puzzle, other miners check to see if the solution is correct. That’s why miners need computationally expansive work to show they did it right. If enough fellow miners grant their approval, the block is cryptographically added to the ledger and the miners move on to the next set of transactions (the next block).

The miner who found the solution will get X (a variable) number of bitcoins as a reward, but only after another X (variable) blocks have been added to the ledger. A ledger is a financial term for a collection of financial accounts.

This incentivizes miners to participate in the system of validating transactions. Forcing miners to solve puzzles in order to add to the ledger provides protection: to double-spend a bitcoin, digital bank robbers would need to rewrite the entire blockchain of calculations.

If one miner comes onto the Bitcoin Core database and changes a single letter or number in the hash, suddenly the output will change dramatically. The ability to obtain bitcoin will be locked through the chain. This is the protective signal that something is amiss, according to Binfarè.

This is what makes the online, decentralized, economic system so secure. After someone uses cryptography to sign a hash to validate a transaction, the transaction is irreversible.

Ethereum is the name of the blockchain for Ether. Christianson and Binfarè suggest that Bitcoin will fade away and Ethereum will become the superior blockchain system.

“While bitcoin is good as a currency to make transactions and make payments,” said Binfarè. “We need Ethereum because almost all DeFi is on Ethereum.”

DeFi — short for decentralized finance — is a system of blockchain-based financial instruments designed without banks. Having DeFi is majorly profitable to its users.

If Bitcoin is like gold, then Ether is like the U.S. dollar. Bitcoin is still valuable, but you can do a lot more with Ether, they say.

There are other blockchains on the rise besides Ethereum that also hold DeFi, such as Solana and Cardano, but Ethereum still currently holds the most.

“Ethereum is a world computer,” said Binfarè. “It’s a computer that everybody can connect to if you have access to the internet and you can run the application on it.”

You can write smart contracts on this universal machine. Smart contracts are a piece of code enclosed by Ethereum. A smart contract is like an ATM machine. You put money in it, the machine will give you an encryption and form a chain. The system is completely automated.

Basically, Bitcoin is the beta version of cryptocurrency. The possibilities of the DeFi technology that runs on smart contracts used on systems like Ethereum is where things really get crazy.

“MakerDAO is one of the largest and most important DeFi on Ethereum” said Binfarè. “Why? Because crypto is volatile. How do you build a financial system that moves around a lot? You can’t really lend and borrow if the underlying collateral moves around so much.”