Can Bitcoin Survive An Apocalypse? 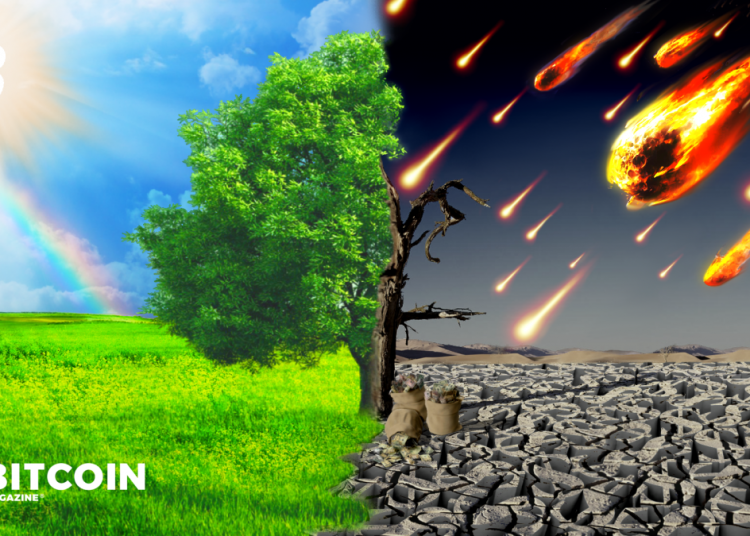 
We often use the term “anti-fragile” or “censorship-resistant” to describe Bitcoin. But do these terms still apply if the internet is intentionally cut off or if some horrible, catastrophic event ends up happening?

The short answer? Yes, Bitcoin can survive an apocalypse. Not only this, but Bitcoin is actually the most robust network on the planet, as well as the most likely to stay alive in some sort of apocalyptic situation.

Do you need internet service in order to use Bitcoin? No. Do you need power from the grid? No. The idea of “off-grid” Bitcoin usage is one that encompasses many different rabbit holes which we’ll be exploring. This article is an attempt to answer a hypothetical question and to show that there are already different options to send bitcoin which don’t depend on the internet or power grid.

Bitcoin is apocalypse-resistant money. This is a result of the many different resources, ideas and accomplishments that hardworking and innovative Bitcoiners have made.

An interesting question about this was raised during Magical Crypto Conference 2019, when Elaine Ou asked Adam Back, CEO of Blockstream, “So, if China were to nuke us tomorrow, and we nuke them back, and all the internet exchange points were totally annihilated, is it conceivable that people could use their decentralized technologies and rebuild the Bitcoin network?”

Adam’s response: “I think the Bitcoin network would continue to operate through this event, surprisingly. I mean, the hash rate would go down. But I’m assuming that there’s some mining in the Swiss Alps in a bunker, or in New Zealand, or somewhere remote like this. There are pockets that would continue to be cross-connected, potentially using satellite equipment.”

There are many examples of governments censoring the internet access of their citizens. Jigsaw, which is a unit within Google that conducts research on internet shutdowns, has made the following observation:

“While data prior to 2016 is patchy, and the true total number of internet shutdowns is likely unknowable, nearly 850 intentional shutdowns have been documented and verified over the last decade via Access Now’s Shutdown Tracker Optimization Project (STOP). Of these, 768 shutdowns across 63 countries have taken place just in the last five years.”

Some other more specific examples of internet shutdowns:

Egypt: In 2011, as a result of anti-government protests, the Egyptian government effectively shut the internet off for its citizens. For five days, 93% of Egyptian networks remained completely unreachable.

Sudan: In the summer of 2019, after a government attack on protestors which led to the death of nearly 100 people, the Sudanese government employed a partial and then full internet shutdown. The shutdown lasted for about five weeks.

Myanmar: As a result of violence between the military and the Arakan army, the internet has been cut off for the majority of the country since June 19, 2019. Myanmar has the world’s longest internet outage to date.

Even the World Economic Forum (WEF) has been mentioning a “cyber-attack with covid-like characteristics,” in which there is some sort of blackout event where all devices would have to be fully disconnected from the internet.

The WEF also recently conducted “Cyber Polygon,” which was a training exercise that simulated a horrible event like this. The exercise involved executives from large multinational corporations, nongovernmental organizations (NGOs) and officials from various governments.

The reality is that the internet can and has been intentionally shut off in the past. But does this mean that Bitcoin itself can be shut off? Absolutely not.

Let’s paint a picture of what an apocalyptic scenario would look like. If this were to happen, we would hypothetically lose: internet, power, food supply, water supply, gasoline and public transportation.

What’s truly amazing is the fact that Bitcoin can still be used in this situation. Not only can you still send bitcoin through a variety of different methods, but you can also run a node and theoretically even mine bitcoin as well (although that would be somewhat of a stretch, but it technically could be done).

The point is, even if the internet and power go out, you can still use Bitcoin. It may not necessarily be easy, but nonetheless, it is still possible.

How does Bitcoin compare to other forms of money during an apocalypse?

Gold has long been perceived as a good thing to have if an apocalypse were to happen. It has historically been considered as something you should hold when the world is ending. But is this really the case?

If you think about it, gold is actually a major liability to hold when massive amounts of people near you are desperate. Gold is even more of a liability to transport and send under this circumstance as well. It is heavy, difficult to hide and difficult to safely move. For this very reason, countless families have lost all their gold, their life savings, when escaping totalitarian regimes as refugees.

Aside from gold, you certainly wouldn’t be able to use your bank. Need to transfer fiat currency? Impossible, other than through the use of cash, but even that has physical limitations. The physical nature of cash makes it a liability in this sense, just as it does with gold.

Not only are both gold and fiat currency subpar options for an apocalypse, but so are all other sectors of investment such as real estate, stocks, bonds, and fine art or wine. To clarify, property itself can, of course, be a lifesaver to have in an apocalypse. You can store all your resources and have a food supply on your property. That being said, there’s a difference between your own property and rental property; in this case, having your own property for personal use would be an advantage, while having rental property would be a nightmare.

Back to the point, the advantage of Bitcoin is that it is NOT physical in nature and it does NOT require trust in a third party to use. Therefore, it is easy to hide, transfer and prevent confiscation or theft. This is a major difference between Bitcoin and any of the other investments or stores of value mentioned. The importance of this cannot be overstated.

Altcoins cannot be used during an apocalypse because they are not sufficiently decentralized. They are not even remotely close to Bitcoin in terms of decentralization and network strength. Let’s get into some of these details now.

Why Is Bitcoin Apocalypse-resistant Money?

As previously stated, Bitcoin is the most robust network on Earth, and ironically, above Earth as well (thanks to Blockstream satellites). But how is it that Bitcoin is so robust?

Bitcoin is decentralized. Sure, your nation-state could temporarily shut off the internet, but they can’t shut off Bitcoin itself because someone, somewhere on Earth, will still be mining and running a node, therefore, keeping the network alive. A prevalent example of how Bitcoin is decentralized is the large number of nodes that it has, which are distributed across many different parts of the earth, all enforcing the rules of the network, keeping a copy of the Bitcoin blockchain and auditing its supply.

In order to kill Bitcoin, you would have to independently go to each node in every country, in every home, and destroy every single one that exists. Given how many there are, this is simply not possible. Here’s a map found on bitnodes.io which shows worldwide node distribution. This is also one of the most conservative estimates of how many nodes are currently running.

Bitcoin is secure. Relating to the previous topic about the WEF’s recent attention toward cyberattacks, Bitcoin itself is unhackable. SHA-256, which is its hashing algorithm, is inconceivably secure. The amount of possible hashes are two to the 256th power, so, two multiplied by itself 256 times. The odds of getting the same hash as someone else and having this kind of manipulation in the network are less than one in 115 quattuorvigintillion — this is more than the number of atoms in the known universe!

Bitcoin can be sent offline. Bitcoin is data, and data can be sent through many different forms of communication such as mesh networks, SMS, ham radio, sneakernet, satellites, etc. We’ll look at each of these options shortly.

You Can Run A Node Without Using The Internet

The large, distributed amount of nodes that the Bitcoin network has makes it apocalypse-resistant money. Even more impressive, your entire area’s internet could go out and you could still run a node using satellites.

The Blockstream Satellite network makes this possible by broadcasting the Bitcoin blockchain over Earth 24/7 for free.

Blockstream engineer, Grubles, wrote a detailed article on how you can build your own satellite node and receive data coming from the Bitcoin blockchain. Note the picture from his article with a TV dish; you could use your own TV dish to run a node, completely without the internet!

Dogecoin, SushiSwap, Ethereum, etc., no altcoins have satellites flying above Earth in order to strengthen their networks. Bitcoin does. Characteristics like this are what separate Bitcoin from everything else; it is serious money for serious people who are determined to keep the network alive. Are you starting to get the full picture here?

How Can Bitcoin Be Sent Without The Internet?

However data can be sent, bitcoin can be sent as well. The internet is simply one way of transferring data but certainly not the only way.

Even if an apocalypse doesn’t happen, there are still valid use cases for…

Holo (HOT): Does the Reward Outweigh the Risks?

Bitcoin (BTC) analysts faced another day of frustration on May 28 as BTC/USD refused to offer volatility up or...