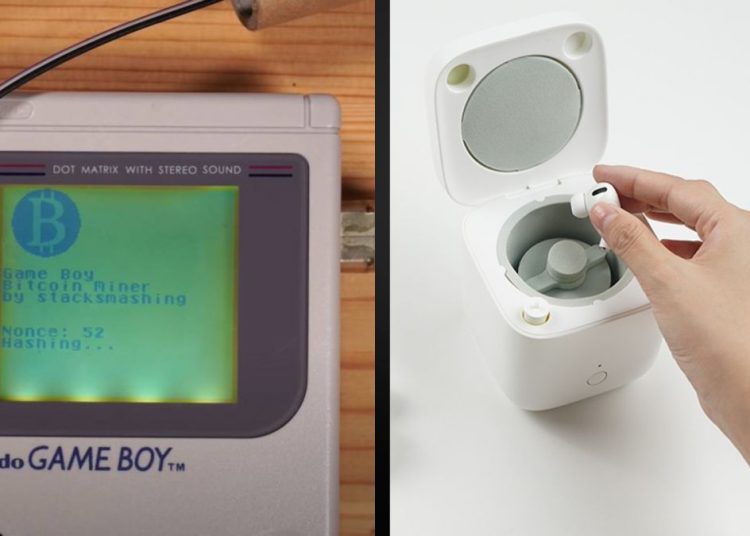 
It’s been a wild year for technology. We’ve seen Apple demolish its competition in processing power thanks to the M1 Pro and M1 Max MacBook Pro, Sony fitting a professional-grade camera sensor in the Xperia Pro-I, and the birth of the Metaverse. Oh, and a KFConsole that can keep your chicken warm while playing Halo Infinite.

With every shining star introduced to the tech industry comes a number of anomalies, and 2021 has seen some particularly strange devices. If you ever wanted an RGB-infused smart mark or a washing machine to keep your AirPods squeaky clean, 2021 has been your year.

With the year coming to a close and CES 2022 gearing up to show off a new slate of hit-or-miss devices, we take a look back at the strangest devices to grace our screens in 2021.

This year has seen a surge of popularity in the ever-lucrative cryptocurrency market . From major financial corporations such as Mastercard and PayPal now accepting select cryptocurrencies to a Pokémon Go-esque play-to-earn crypto game, digital currency will only continue to evolve to stranger heights. Those who own the best laptops for crypto mining are likely happily mining Bitcoin, leaving everyone else who are finding it virtually impossible to nab a system gnashing their teeth. Well, when the going gets tough, some enterprising miners figured out how to get the job done on a Nintendo Game Boy.

Known for modding age-old devices, YouTuber stacksmashing successfully found a way to mine Bitcoin on a Game Boy. I mean, who needs an Nvidia GeForce RTX GPU anyway? But don’t expect to just dig out your old Game Boy and start earning some Bitcoin, though. The YouTuber had to add a few tweaks to successfully mine on a device that came out in 1989. That alone hints at how slow it can mine.

As explained, the modder had to find a way for the Game Boy to connect to the internet — an essential part of connecting to the Bitcoin network. This was done by using a Raspberry Pi Pico and modified Nintendo Game Link Cable, with the Game Boy connected to the Raspberry Pi Pico through a logic shifter and the Pico attached to a computer.

How well did it work? Compared to application-specific integrated circuit (ASIC) miners today, which offer up to 100 terahashes per second, the Game Boy delivered 0.8 hashes per second. That’s considerably slower than modern machines, but hey, at least it works. Unless you have millions of years to spare, you’re better off finding other options to get Bitcoin.

Apple’s popular lineup of AirPods look incredibly swish right out the box, but AirPods owners will forever have to deal with one gross problem — earwax. Ew, yuck, etc. What if there was a special washing machine that cleans up that problem? Introducing the Cardlax EarBuds Washer: a bizarre washing machine specifically designed to clean and polish your AirPods. In as little as two minutes, your AirPods will go in a mess and come out looking brand spankin’ new. Well, dirt-free, at the very least.

The Cardlax EarBuds Washer is powered via USB-C and is equipped with a soft brush and a built-in makeup sponge soaked in a cleaning solution that will clean your AirPods in as little as two minutes.

The brush tool cleans the inside of the earbuds, while the actual washing machine part of the device uses a rotating sponge dosed in an “anti-bacterial” spray that claims to attach and absorb all that disgusting goo and particles. While it looks like a fun and nifty device to use, we suspect the brush tool does a majority of the cleaning up.

The washer isn’t just for Apple’s popular earbuds, as it’s also compatible with Samsung products such as the Galaxy Buds Pro, Bose’s QuietComfort Earbuds, Jaybird, Jabra, ECHO, and 99% of other wireless earbuds. Strangely, there’s no mention of Sony’s WF-1000xM3. Perhaps those headphones make up the 1%.

If you prefer a miniature washing machine to get rid of nasty gunk, the Cardlax EarBuds Washer can be nabbed from $33 with an early bird offer, with shipping fees ranging from $6 to $15. However, as with all things on Kickstarter, it pays to be skeptical.

Every dentist will tell you to brush your teeth for two minutes twice a day. This is standard practice to keep your gnashers squeaky clean, but those 120 seconds can sometimes feel like an eternity. Instead of a small set of bristles designed to clean one tooth at a time, why not get a toothbrush that cleans them all at once?

The Y-Brush toothbrush is the answer. Designed like a mouthguard, the odd-looking brush was first shown off at CES 2021 and is now used by “tens of thousands of customers.” If that’s the case, it might be less strange and more revolutionary. Still, compared to the conventional toothbrush, this device is bizarre to look at.

The Y-Brush is deemed to be the only “360 toothbrush robot” on the market, boasting 35,000 nylon bristles that remove plaque in as little as five seconds for your top and bottom set of teeth. This is done through three different vibration modes that perform 20,000 oscillations per minute. A mouthguard that brushes your teeth posthaste is ideal, but the $152/ £111 price tag certainly isn’t. If you’re looking for an out-there Christmas gift, you may have found it.

From the Asus ZenBook Pro Duo 15 to the Lenovo ThinkBook Plus G2 ITG, dual-screen laptops push the limit on what a laptop can be — and they look snazzy. So, when does a laptop stop being a laptop? Expanscape’s Aurora 7 laptop may answer that question with a resounding “until I say so.” The company developed a seven-screen laptop intended for developers, cyber-security analysts and even content creators. Given the specs its latest M3 protoype offers, we’re not in the least bit surprised.

The Aurora 7 boasts four 17.3-inch, 4K panels along with three 7-inch 1920 x 1200-pixel displays. There’s even a mini-LCD display under the keyboard for system status and user-configurable info. As you might tell by now, this isn’t a thin machine.

Each of the panels swivel out of the laptop’s chassis, which means no extra screens or extensions need to be added when setting it up, making it a true portable laptop.

“How on earth is this thing powered?” is a very good question. It takes two internal batteries, and even they can’t make it last very long with a power source. Its primary internal battery has a 82Wh capacity for the system alone, while its 148Wh-capacity secondary battery powers its screens. Expanscape notes users “cannot currently take [the] system on a plane,” but we don’t wonder why. The battery life for the screens lasts 2 hours 20 minutes, but when using the full system with the processors boasting higher clock speeds of 4GHz, it goes for only 28 minutes. Keep that machine plugged in.

We’re not sure if Expanscape’s Aurora 7 laptop will ever hit the market, seeing as the company’s website disappeared. It does exist, however, and I dare laptop manufacturers to follow suit.

When I heard that Kentucky Fried Chicken — the fast-food chain notorious for selling dry biscuits and greasy chicken that tastes like leather — launched a gaming console, I thought it was a joke. I double-checked the date, and no, it was not April 1st. KFC truly lost its mind, er I mean, tapped into its “creative side” and rolled out a gaming console that doubles as a chicken warmer for gamers who’ve been plagued by the horrors of cold meat.

The KFConsole is packed with an ninth-gen Intel Core i9 CPU and an unspecified, swappable Asus RTX graphics card. KFC boasts that the gaming console is VR ready, features ray tracing, outputs 240 frames per second at up to 240Hz, and supports 4K gaming. Thanks to the KFConsole, you can play Cyberpunk 2077 and Call of Duty: Black Ops Cold War while ensuring that your fried chicken remains crispy. It’s a strange concept, but on the plus side, KFC is self-aware about the additional cooking its fried chicken needs.

We love that KFC is perpetuating the sedentary, couch-potato lifestyle. As gamers sink hours upon hours into their favorite titles, a chicken-warming console is just what they needed — more incentives to keep them anchored to their gaming chairs all day.

If you’ve ever wanted to go for the post-apocalyptic, end-of-the-world, tactical gas mask look to add to your hazmat suit wardrobe, Razer’s new Zephyr is the accessory you’ve been waiting for. In 2019, if you told me that we’d all be wearing masks the following year to battle a contagious, world-dominating virus, I would have scoffed and said, “You’re out of your mind.” But here we are in the thick of mask mandates, COVID-19 vaccinations and new coronavirus variants. In the midst of all the madness, Razer swooped in to capitalize on a gap in the market: luxury, high-end smart masks.

Wearing the Razer Zephyr Smart Mask makes it look like you’re defending yourself against spores in The Last of Us, a game that seemed to creepily portend the fate of our world. It’s packed with FDA-registered, N95-grade filters that are lab tested for 99% bacterial filtration efficiency. However, Razer can’t say for sure whether the Zephyr Smart Mask is an effective defense against COVID-19. The mask is technically a wearable air purifier; it features chambers that allow freshly filtered air to flow freely so that you can breathe comfortably. As if that wasn’t bizarre enough, in true Razr fashion, the Zephyr Smart Mask also features RGB lighting with 16.8 million colors and head-turning effects. I never thought we’d come to a point in our society where we’d need to charge our masks via USB-C cables, but here we are. Razer’s Zephyr Smart Mask is certainly one…