DOT/USD has produced short-term highs, and following the Christmas weekend is now banging up against values not seen since early December.

On the 20th of December, DOT/USD was near the 23.5000 mark and treading depths not seen since late August. However, in the past week of trading, DOT/USD has climbed higher and produced a solid incremental surge and is now within highs not demonstrated since early December. As of this writing, the price for DOT/USD is close to the 31.6000 level and the price of Polkadot is correlating rather politely to its major counterparts which have seen gains the past week.

Before traders decide to jump on the bandwagon based on the belief another surge higher is about to be exhibited by DOT/USD, they should make sure they keep their ambitions in check. The holiday season can produce strong volatility due to volumes being rather light and producing imbalances. This allows big trading positions in which Polkadot is being bought and sold via exchanges and cryptocurrency wallets to effect values quickly.

On the 4th of November, DOT/USD was trading near 55.0000 and had punctured highs made in May of 2021 with a strong demonstration of strength. However, since attaining these apex highs almost two months ago, Polkadot has struggled to find renewed buying momentum and it has gradually traversed lower, hitting rather nervous depths only one week ago. While the run upwards the past few days has been impressive and scored large percentage moves for short-term traders, the trend should be viewed cautiously.

As DOT/USD continues to bounce along the 31.5000 to 31.6500 level, traders may prove wise to wait to see if the early December values can actually be challenged. Conservative traders who are opening new positions of DOT/USD and want to wait for the next surge of momentum higher to indicate an ability to penetrate resistance levels may want to wait for the 31.9000 level to be penetrated and sustained.

Aggressive traders who feel that DOT/USD has ability to climb higher in the short term and want quick trades could look at this resistance as a take profit location. However, traders need to make sure their transaction fees allow them to look for fast trades if they are attempting to scalp pips.

Traders who are skeptical of the sudden rise of DOT/USD and want to be sellers may look at the current price realms as overbought. They should use stop loss orders correctly in case their technical analysis doesn’t meet expectations. DOT/USD is in an intriguing trading area and speculators may be attracted to the cryptocurrency if they want to make short-term wagers. 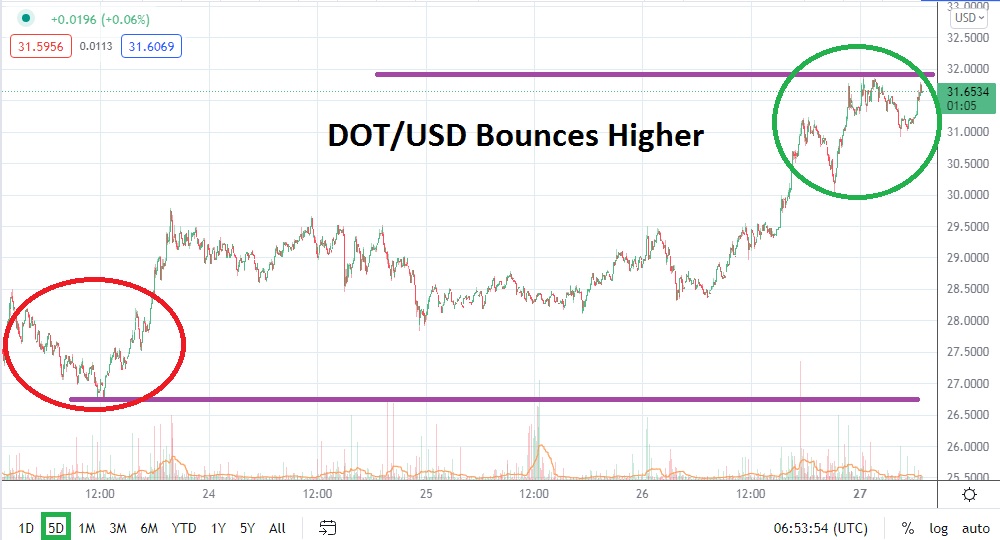 Cheems Inu – The New Dog In Town By CoinQuora