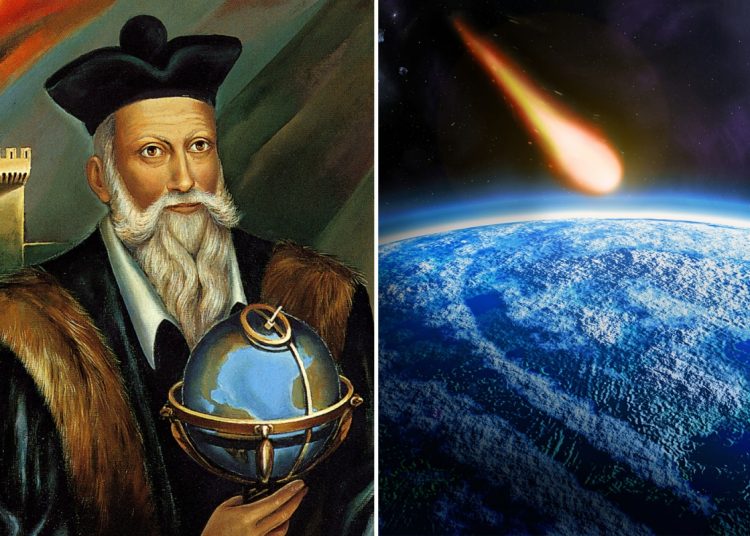 
FROM the death of a dictator to cataclysmic quakes, Nostradamus is believed to have predicted dire events for 2022.

The French philosopher wrote 6,338 prophecies, suggesting when, where and how our world will dramatically end.

Many of Nostradamus’ predictions, such as the rise to power of Adolf Hitler, World War II, the September 11 terrorist attack, the French Revolution and the development of the atomic bomb have been interpreted as being accurate.

Nostradamus also appeared to have predicted the start of the coronavirus pandemic of 2020, according to believers.

According to Yearly-Horoscope, more than 70 per cent of his prophecies have been fulfilled so far.

But his prophecies have continued to amaze those who follow his work.

Here’s what Nostradamus believers have interpreted from the entries in his book concerning 2022.

According to the interpreters of the prophecies, Nostradamus may also have predicted the death of North Korean dictator Kim-Jong Un.

In the 14th quatrain of Centuria IV, he wrote: “The sudden death of the first character / It will bring about a change and may place another character in the kingdom.”

Nostradamus believers have speculated the leader is Kim amid his dramatic weight loss and consistent rumours about his health.

The North Korean despot had not been seen for some time since a huge missile exhibition in October — his longest absence for seven years.

He reappeared again on November 15 – but it only fueled longrunning speculation about his health.

The third quatrain of Nostradamus’ Centuria III is believed to forecast a huge earthquake in Japan, in 2022.

He wrote: “Towards midy extreme siccity / In the depths of Asia they will say earthquake.”

Indeed, if a quake did happen in the middle of the day it could wreak terrible damage and death.

On October 7, an earthquake estimated at a magnitude of 5.9 at its epicenter rattled the greater Kanto region.

While the damage was minimal, it was the strongest to hit Japan’s capital since the earthquake and aftershocks of the temblor that devastated the Tohoku region on March 11, 2011.

One of Nostradamus’ prophecies for the coming year directly concerns Paris, according to some interpretations.

The French capital would be under siege – suggesting a war in Europe.

The section referring to this reads: “All around the great City / Will be soldiers lodged by fields and cities.”

Chaotic scenes have already come to the streets of the French capital this year amid riots over Covid restrictions.

And of course Paris was infamously attacked in 2015 by ISIS terrorists who killed 130 people.

It was the deadliest attack on France since World War 2.

This has been interpreted to mean wars and armed conflicts in the world will probably only increase hunger.

Therefore it will increase migratory flows.

And experts believe when Nostradamus refers to the beaches, he is predicting seven times more migrants will arrive on the beaches of Europe than normal.

Immigration continues to be a major political debate in the UK and Europe, especially following the deaths of 27 people in the English Channel.

And for some Nostradamus writing also predicted the fall of the European Union – which has been racked by trouble since the UK voted Brexit in 2016.

Interpreters point to the Treaty of Rome, ratified in 1957, essentially founded the Union.

According to Nostradamus, it is claimed, Brexit was only the beginning, and the whole European Union was fated to collapse in 2022.

It has already been suggested Poland could be the first country to follow the UK out of the bloc after a row between Warsaw and Brussels.

In 2021, an especially prominent prediction was that some sort of asteroid would hit the earth.

“Fire do I see that from the sky shall fall,” the astrologer wrote.

The earth did have a near miss with Asteroid 2021GW4 this year, though it wasn’t considered too much of a threat by NASA, and didn’t exactly fit the astrologer’s dramatic prediction.

Among Nostradamus’ predictions for 2021 is also the rise of artificial intelligence.

He wrote: “The Moon in the full of night over the high mountain / The new sage with a lone brain sees it: By his disciples invited to be immortal, Eyes to the south. Hands in bosoms, bodies in the fire.”

As modern artificial intelligence becomes more advanced each year, this warning about immortal disciples takes on a very real meaning.

We pay for your stories!

Do you have a story for The US Sun team?

Huobi Wallet to Issue 45,000 Ula NFTs to Users, Reflecting Growing Role of NFTs in its

Image source: Getty Images In 2022, the cryptocurrency market is in the midst of its biggest crash ever. In...

American rapper and NFT enthusiast Snoop Dogg believes that every great industry goes through a downfall and cryptocurrency will surely bounce...

Online hacking collective Anonymous has promised to bring a crypto boss ‘to justice’ over a cryptocurrency crash that saw...

Can Regulators Catch Up to Crypto?

In April, Fidelity became the first major retirement plan provider to allow everyday people to invest in Bitcoin with...

Huobi Wallet to Issue 45,000 Ula NFTs to Users, Reflecting Growing Role of NFTs in its