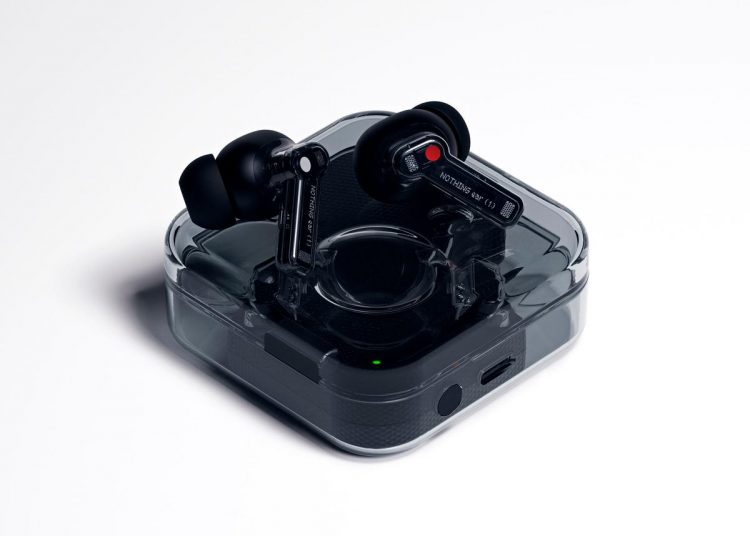 
The Nothing ear (1) black edition is a cosmetic update of the Nothing ear earbuds that appeared with some hype a year ago. As the name suggests, rather than white these are black – but, not just regular black – they are “moody, smoky and elegant” – or at least so the marketing copy informs me.

As a newcomer to the brand, I soon realised that the Nothing Ear brand is designed to appeal to the socially conscious and trendy. The company is London based and, it says, “on a mission to remove barriers between people and technology”. It’s “crafting intuitive, flawlessly connected products that improve our lives without getting in the way”. OK then. More on that later.

Nothing isn’t just selling its wares in shops and websites though – that’s far too average – it also has a new limited installation (or booth as the norms would say) that operates from 11:00-19:00 GMT Seven Dials, Covent Garden in London starting from 4 December. Like a market stall for tech. How earthy and real.

No doubt they are already gone but the company says that the #the100 first units of ear (1) black edition (all lower case, obviously) willbe individually engraved from 1 to 100. And, naturally, you don’t just have to pay with regular money – in certain countries, you can buy your earbuds with Bitcoin, Ethereum, USD Coin (USDC) and Dogecoin (DOGE). So far, so cutting-edge.

Why was I not surprised to find that the Nothing earbuds have been tuned by a company that is actually called Teenage Engineering?

Finally, it has also declared that it is “carbon neutral” saying that it has “worked with internationally recognised third parties, like Geneva-headquartered SGS, to independently assess and neutralise the carbon footprint of the first product in its ecosystem.”

OK, it would be churlish to pour scorn on carbon neutrality, (even if it is questionable as a concept – OK, I guess I have poured scorn), but I have to admit that reading all of this made my eyes roll back so far in the head they did a full 360.

My interest was more piqued by the fact that part of the nothing team is Tony Fadell, who is known as the man behind the original iPod. That’s a product that changed how we listened to music, so I was confident we’d be in good hands.

The cool factor with the Nothing ears starts with the box – the cover of which you have to unwrap like a funky Amazon package. Inside you’ll find a translucent plastic case, that holds the cool-looking earbuds – also black surrounded by clear plastic (sorry, moody smoky and elegant plastic), that did bring to mind the design of Apple products circa 2000. (Yes, I’m old). The case charges via USB-C, but also offers wireless Qi charging compatibility, which is a great idea.

You pair the earbuds with the case by opening the lid and pressing the pairing a button on the side and it worked well. The buds use the latest Bluetooth 5.2 standard, so pairing was easy. This also helps extend the battery, which is rated at four hours. That’s not huge but the earbuds are tiny so you’re not going to get a large capacity battery in there.

This brings us to the Nothing ear’s best feature – they are indeed “ultralight”, weighing in at just 4.7g, and you can barely feel them in your ears. Whether sitting at my desk or out running, it did almost feel like I was wearing nothing in my ears.

I was also very impressed with the sound quality, which is bright and engaging. The guitars, high hats and finger clicks in Michael Jackson’s Rock With you stand out in the mix and the guitar in Olivia Rodrigo good 4 u sing out brightly. However, whatever you are listening to, compared to other buds, such as the NuraTrue’s, the sound is undeniably thinner and less rounded.

Considering the target audience, they should be perfect for blasting out Rodrigo’s Brutal, or indeed a classic such as Nirvana’s Smell Like Teen Spirit, but to my ears, the output felt too lightweight to do these justice. While they sounded fine in isolation, the Nothing ears suffer, by comparison, to, admittedly, more expensive fare. Of course, if something costs twice as much a difference in quality is to be expected, but don’t let yourself be deceived that you’re not missing out by spending less.

The real issue I had with the Nothing Ear’s was the frankly bizarre behaviour of the touch-sensitive controls. While I was reviewing them a firmware update arrived alleging improved responsiveness, but from what I experienced they still have some work to do. A double-tap on the left bud will pause the headphones and another to resume, and this sometimes worked. However, inexplicably it would sometimes stop responding, or pause when I hadn’t pressed anything. When a bus passed the headphones suddenly paused as if the air pressure of the passing large vehicle had activated it.

The headphones can also be set up so that holding and pressing the side of a bud will turn off the active noise cancellation/ however, while out for a run the headphones would do this without any input from me. When you take a single earbud out the music pauses and resumes when you place it back in your ear – but if invariably it pauses again for no discernible reason. Swiping up and down on the stem of the left earbud raises or lowers the volume, and this did work well, but sometimes it caused the device to pause without a double-tap. I never knew what the buds were going to do next: the firmware still needs work. Ultimately, the Nothing ears were infuriating to use; so much for “crafting intuitive, flawlessly connected products that improve our lives without getting in the way.”

The active noise cancelling did an adequate job at reducing the impact of nearby conversation but did not block them out completely, even on the maximum setting (there’s a light setting too), while a transparency mode for conversations, is present too and did the job. There’s also an Equalizer and you can choose between Balanced, More Treble, More Bass or Voice to emphasise the mid-range.

Should you buy them?

The Nothing Ear’s offer a well-specced package, with active noise cancelling and social mode in a very attractive package, they are very comfortable to wear and the £100 price is accessible. For some that could be enough and if easy listening rather than outright sound quality is of primary concern, then these are a very appealing choice.

However, battery life is just OK, and the touch-sensitive controls seem to have a mind of their own and frankly, are an annoyance. Tony Fadell might be on the product team, but if the iPod had come out with this many flaws, we’d all still be buying CDs.

Unless you’re dead-set on the aesthetics and don’t want to spend more – I’d just wait – keep your existing earphones a while longer and save up for something better.

Read More:Why The Nothing Ear (1) Black Edition Earbuds Are Style Over Substance

Why Bitcoin, Ethereum, and Dogecoin Dropped and Popped Early Today | The Motley Fool

Why Bitcoin, Ethereum, and Dogecoin Dropped and Popped Early Today | The Motley Fool