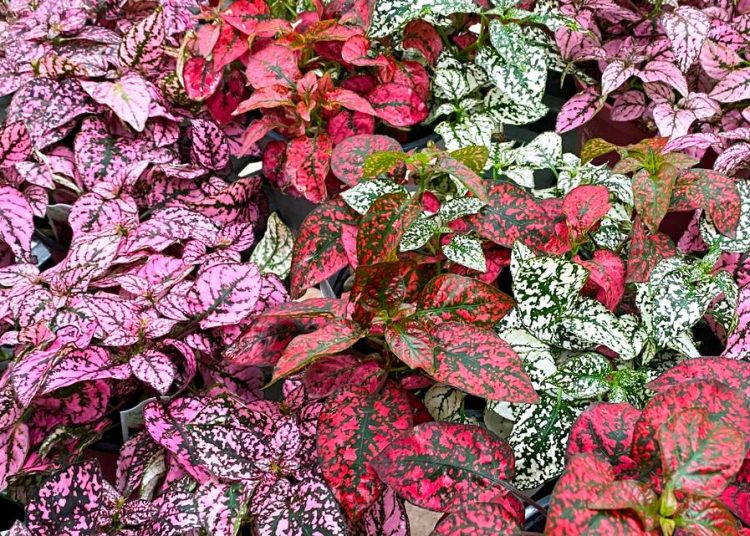 
If I were an interior decorator, this column would be about something like soap dishes or door latches. They’re of roughly the same decorative importance as polka dot plants are to gardening: small, but noticeable.

However, to a rabid young plant guy in his teens back in the 1950s, pink polka dot plants were pretty spectacular. That was young Neil who was dazzled by anything off the beaten path. And growing up in College Station, where maroon and white were the prime diversions from basic green, if a plant showed up speckled in pink, it was quite noteworthy.

I learned this plant in the Floriculture greenhouses at Texas A&M. At that point the only color was that pink form, but it was an interesting novelty. We learned that it was native to Madagascar, where odd plants of many sorts grow, and that it’s in the plant family Acanthaceae. I learned it under a different species name. It’s now assigned the moniker Hypoestes phyllostachya. Rolls off your tongue, doesn’t it!

So, polka dot plant and I jump ahead about 10 years. I was taking an intercollegiate flower judging team from Fort Collins, Colorado, to the national competition at the University of Illinois. (Yes, there truly is a competition for everything. I was actually on the winning team from Ohio State when we won in Morgantown, West Virginia, just a few years earlier.)

Back to my story. Competition and ceremonies completed, we left the University of Illinois and headed back toward Colorado. I decided to take my students through West Chicago to Ball Seed Company, one of the nation’s largest seed wholesalers to growers.

That was 50 years ago (no wonder my knees hurt) and the plant is still a relatively minor player in the whole scheme of garden color. Its season comes up in warm weather, so this column really ought to be running several months from now, but I ran across a really nice greenhouse bench of them in a local nursery last week. They were being offered for use in sunroom pots and other bright indoor gardens.

I figured this was an easier time to work them into a story than mid-spring when things get super-busy, so that was my motivation.

What you need to know to succeed …

Polka dot plants need bright light, but don’t put them in direct sunlight from mid-spring through the summer. In those months they’ll need to be pulled back into bright shade.

Grow them in pots, either in small groups of three plants in 10- or 12-inch pots or in larger pots in combination with taller plants. Mature polka dot plants will be 10 to 14 inches tall and wide.

They do best in well-draining, highly organic potting soils that can be kept moist. They are slightly drought-tolerant, but try never to let them wilt to extremes or they will lose lower leaves and become leggy.

Apply a water-soluble, high-nitrogen fertilizer in a diluted solution every couple of weeks through the growing season. Your goal will be to keep them growing vigorously and not let them stall out. If the plants do become leggy, pinch or prune them back to induce new growth from below. If they still don’t look good, it may be time to replace them.

Knowing the close affiliation of PanAmerican Seeds and Ball Seed, I wouldn’t be surprised if Splash Selects aren’t the great-great-grandchildren of those plantings I saw in West Chicago way back when!

Related stories from Fort Worth Star-Telegram


Read More:Here’s how you can nurture little polka dot plants into a big-time gardening splash