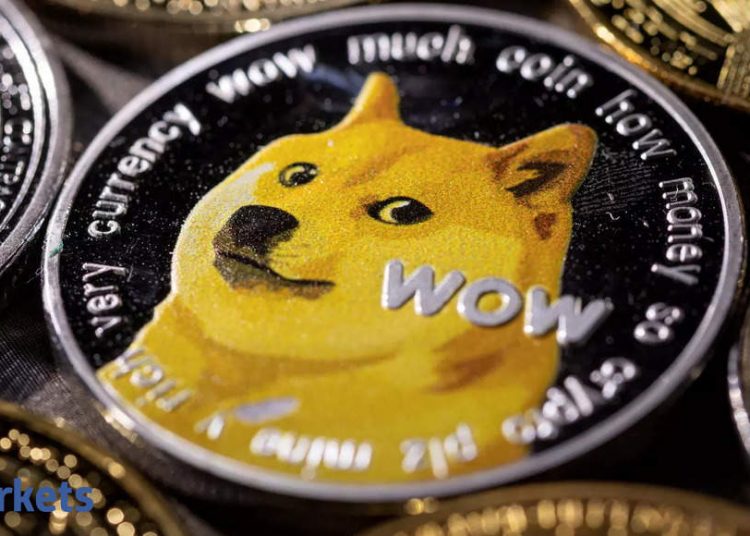 Cryptocurrency enthusiasts who piled into meme coins such as Dogecoin and Shiba Inu amid the long-time industry rallying call of “to the moon” are finding this year’s journey back to earth pretty painful.

Dogecoin, Shiba Inu and other tokens associated more with online jokes rather than actual software products have been hit harder than sector originals Bitcoin or Ethereum during the recent retreat from the record price levels reached late last year. Doge is off nearly 80% from its all-time high of 74 cents in May, and Shiba has declined more than 65% since hitting its peak of fractions of a penny in late October, according to data compiled by Messari.

Trading volumes have fallen off, now measured in millions instead of billions. And the jokes that once swayed a legion of mostly retail day traders to buy up coins on a whim come with a hint of sadness.

The frenzy started with Doge. A digital token created in 2013 by a pair of software engineers took off as interest in crypto trading spiked and a new crop of retail traders took to social media platforms, using jokes, sarcasm and trolling to gin up their popularity. Tesla Inc. Chief Executive Elon Musk’s embrace of the token helped to send it soaring. Doge’s popularity inspired the creation of new tokens based on the breed of dog, including Shiba Inu, Baby Shiba Inu and Floki, which is named after Musk’s pet.

Amid the ongoing crunch in crypto prices, the memes have become less breezy. One Twitter user under the handle Shibetoshi Nakamoto tweeted a cartoon of a young man in a backwards cap asking at the pearly gates: Did I waste my life by making Dogecoin?

DogeTooCheap tweeted a picture of a grim reaper with the face of a Shiba Inu knocking at doors labeled 17 cents — a level at which the coin has struggled to break above since late December.

Stalwarts say Shib coin holders are “on the way to the moon and beyond,” but dedicated chatrooms show that the oft-repeated rally cry appears to have lost some of its power.

January will be the month to determine the growth of #SHIB. I have a very good feeling we’re on the way to the moon and beyond.

January will be the month to determine the growth of #SHIB. I have a very good feeling we’re on the way to the moon… https://t.co/YCGaiUjDXL

On a Shib-dedicated Discord channel a user going by djcau5e wrote: “It’s a complete roll of the dice, while I would love to go to the moon I think a lot of peoples expectation to hit $1 or even .01 is unrealistic in the next few years.” At Shib’s peak, it was $0.0000875.

Three Ethereum Rivals Are Growing at an Unprecedented Rate, Rising Faster Than ETH Itself:

Three Ethereum Rivals Are Growing at an Unprecedented Rate, Rising Faster Than ETH Itself: