Re:water Crypto Colosseum is about to launch | NewsBTC 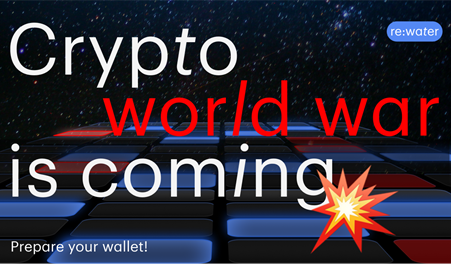 
re:water is an engineering political System implemented by the methods of a crypto game.

The platform is a cross-chain infrastructure, allowing users to use *any existing tokens to participate in the struggle for material resources.

re:water uses WTR token as a universal medium of liquidity. It is a renewable resource in the re:water ecosystem that is used both as a reward to the stakers and as a utility token to compete in a war-like manner for the staking reward on the platform.

To get Water, users need digital NFT land plots that mine Water. The Global Cloud rains down the land providing crazy APYs for the landowners. This inevitably leads to conflicts for the place in the sun and battles in the re:water metaverse for the limited amount of land plots and Water.

Decentralized finance is fragmented, many projects offer tokens that do not have a function. Still, thousands of these tokens are being traded and have their own audiences of fans who do not always have a good understanding of finances and try to test their luck. For this reason, DeFi looks like a blend of a stock market and betting.

At the same time, cryptocurrency market participants like to think of themselves as the founders of a new economy. At the same time, in its current state, this market is too disjointed to have a shot at becoming an economy. Right now, it looks more like a game that imitates the economy and lacks many crucial things that the actual economy has. To allow it to mature, re:water introduces the Water token that will bring liquidity together.

To get passive income via liquidity mining in the re:water ecosystem, users will have to get hold of one of 516,000 land plots. You can do it either during the Colonization phase when the land plots are sold for a price ranging between $1 and $512 or get hold of someone else’s plot later. After the plot is acquired by a user, its profitability will depend on how much Water it can attract during a rainfall.

To increase the profitability of a Tile, its owner will need to increase its gravity by staking liquidity into it. Any digital token is of use, which makes re:water a place where every token can yield profit.

re: water is an ambitious project from a well-known team in the field of social-media + fin-tech. The team has significant experience in building the most complex engineering and technical solutions, as well as in bringing projects to the top of the market coverage of the audience in English, Spanish and Russian-speaking audiences. Reaching the user audience of over 10M.


Read More:Re:water Crypto Colosseum is about to launch | NewsBTC