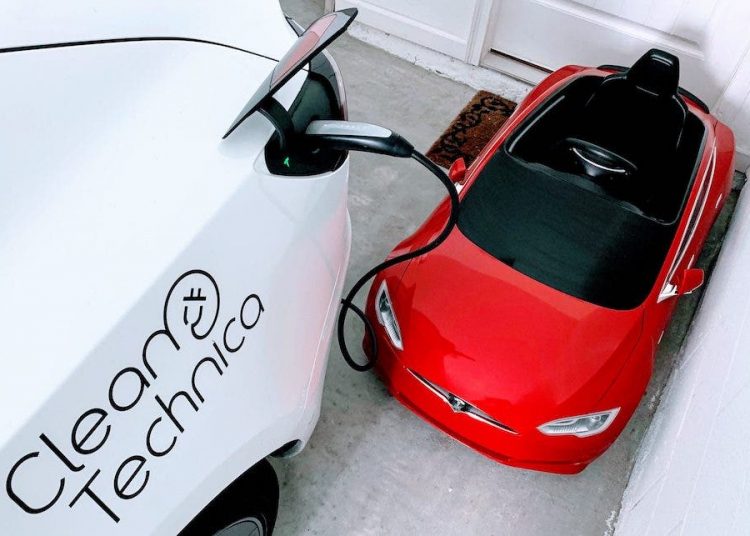 
CNBC has shared the story of Siraj Raval, an owner of a Tesla Model 3 who has tried various ways of mining cryptocurrencies. His setup includes free bitcoin mining software on his Mac mini M1, which is powered by plugging an inverter into the 12-volt power socket in the center console of his Model 3.

In addition to that, he has hooked up a GPU to the frunk of his vehicle and runs both machines off of the car’s internal battery. Raval said that it was worth the risk of voiding his car warranty. In 2021, the price of ether peaked and Raval said that during this time, he was making $800 a month.

Raval wasn’t the only cryptocurrency miner the article mentioned. Alejandro de la Torre, who mines bitcoin, said that mining from a Tesla is just like connecting to any other power source. (But, of course, it is a bit different, given that you’re powering the mining with your mode of transportation.)

“The main component is the price of the electricity. If it’s cheaper doing it through an electric vehicle, then so be it.”

Another cryptocurrency miner, Chris Allessi, or K-Man on YouTube, the first electric car dealer in Wisconsin, decided to do a bit of tinkering with his Tesla in 2018. Allessi builds custom EVs in his free time and loves getting creative with electric motors. He told CNBC:

“I like electricity. I like zapping stuff, building stuff. You give me an electric motor, I give you a finished product.”

He’s also tried mining for bitcoin with his Tesla. He plugged a Bimain Antminer S9 directly into his car battery via a power inverter that adjusted the voltage of his Tesla battery to a level that is compatible with the Antminer.

The article goes into more technical detail about mining for bitcoin. The interviews with Allessi, Raval, and de la Torre focused more on the profits. Profits are a great motivator; however, what the article doesn’t really focus on is how these Tesla owners are showing that you don’t need coal to mine bitcoin or any cryptocurrency.

The article, in my opinion, is a great read, and I enjoyed how the author shared the stories of the Tesla owners mining their crypto. However, I want to dive right quick into just how important it is to move away from coal, especially in mining for cryptocurrency.

Last year, Tesla started accepting Bitcoin as a payment option for its vehicles but then later suspended that option while pointing out that it wasn’t supporting Tesla’s mission. This landed Elon Musk on the bad side of several bitcoin maxis who went from loving Tesla to hating it, but Elon and Tesla both took a firm stance against the use of fossil fuels in crypto mining.

This is inaccurate. Tesla only sold ~10% of holdings to confirm BTC could be liquidated easily without moving market.

In May 2021, Elon Musk shared a statement about Tesla and Bitcoin to address the drama, but he also followed that up with information from the Cambridge Bitcoin Electricity Consumption Index (CBECI), noting that the energy usage trend over the first few months of 2021 (when Tesla made its record-breaking, historical moves) was insane. Below is a graph that reflects the total bitcoin electricity consumption over the last six months of 2021. As you can see, from June (when Elon shared the graph), the usage has risen. The graph below shows a comparison of how much electricity and energy the production and consumption of bitcoin needed. These are in terawatt-hours (TWh). Bitcoin has been criticized for its use of coal several times, but lately, miners seemed to have doubled down on their uses of fossil fuels. Most people are aware of the situation in China but don’t take into consideration the excessive use of fossil fuels right here in the US.

In November 2021, the Ohio River Vally Institute reported that bitcoin mining was breathing life into zombie coal plants. The article described it as a gold rush that would be both costly and hazardous for Pennsylvania residents.

In September 2021, NBC reported that Stronghold Digital Mining bought one of the Pennsylvania coal mines and is burning enough coal waste to power around 1,800 cryptocurrency mining computers. NBC also reported that Stronghold plans to operate 57,000 mining computers by the end of 2022, which requires buying up two more coal waste power plants in the region.

In July, Bloomberg called out Stronghold’s plans to burn coal waste and pointed out that it isn’t as green as they want you to think it is. The idea that using coal that was already mined is green is a false claim. Burning coal isn’t green and never will be. It may be greener to burn coal that is mined instead of mining more coal, but it’s all a hot, dirty mess, and in the long run, bad for our environment and bad for human health.

I bring all of this up to point out that what the Tesla owners are doing is much more sustainable — especially if they were to use 100% renewable energy to charge their vehicles. Allessi has free Supercharging for life, but I think a great investment for the savvy Tesla owner who wants to mine crypto would be to invest in solar and Powerwall. This may sound like a lot, but chances are, they would use the solar and Powerwall for their homes as well, and if they live in an area that receives a lot of sun, it could work.

Have a tip for CleanTechnica, want to advertise, or want to suggest a guest for our CleanTech Talk podcast? Contact us here.


Read More:Tesla Owner Mines Up To $800 A Month In Crypto With His Car

The terrible, unprovoked war in Ukraine has destabilized that country’s economy and banking system, leading both Ukrainian politicians and...

DAVOS, Switzerland — Crypto-related technology companies are out in force at the annual World Economic Forum in Davos, even...

Bitcoin has failed to hold the $30,000 level on Monday after scoring its eighth consecutive week in the red...

Bitcoin has the potential to help unlock between 2 to 4 terawatts of clean, continuous and year-round baseload power...