The crypto market has been quite volatile throughout its short history, but there has really been only one crypto winter. In early 2018, the market peaked near $830 billion before falling 88% to $100 billion by the end of the year, and prices remained suppressed for nearly three years. It wasn’t until early 2021 that the crypto market actually surpassed its previous high.

Today, the crypto market sits 57% off its peak of $1.3 trillion, and some analysts believe we’re entering another crypto winter. If that’s true, the current downturn could drag on for quite some time, and things could certainly get worse. But that creates an opportunity for patient crypto investors to profit.

Here are two cryptocurrencies worth buying on the dip. 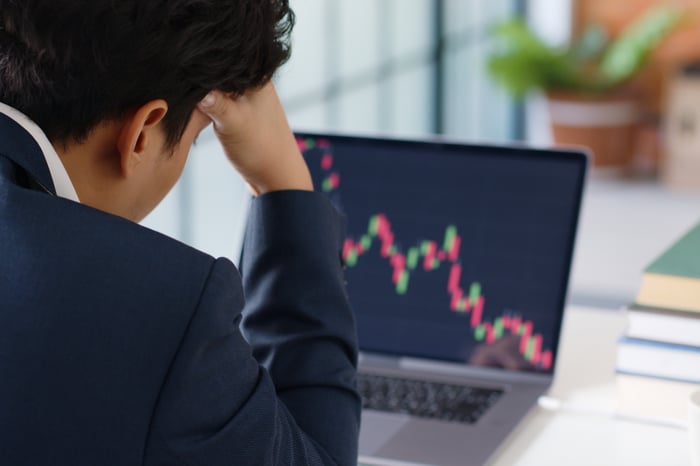 Like Ethereum, the Polkadot (DOT -0.54%) blockchain was designed to support an ecosystem of decentralized applications (dApps) and decentralized finance (DeFi) services. The project was started by computer scientist Gavin Wood, who also founded the Web3 Foundation, a nonprofit group that aims to create a decentralized internet.

Polkadot actually aggregates multiple blockchains. Its core chain (known as the relay chain) relies on a proof-of-stake (PoS) consensus protocol to confirm transactions and secure the platform. Shard chains (known as parachains) allow transactions to be processed in parallel, rather than sequentially, which makes Polkadot fast. In fact, Wood estimates the platform will eventually support 1 million transactions per second (TPS). For perspective, Ethereum currently handles fewer than 15 TPS.

Also noteworthy is that Polkadot features specialized parachains (known as bridges) that are compatible with external blockchains, meaning they allow tokens and data to be transferred from one chain to another. For instance, the Moonbeam parachain allows developers to deploy Ethereum dApps and DeFi products on Polkadot. That’s noteworthy because Ethereum is the largest ecosystem of dApps and DeFi products in the blockchain industry. But with Moonbeam now live — an event that took place in January 2022 — Polkadot could see accelerated adoption.

In summary, Polkadot addresses two of the biggest problems that plague the blockchain industry: scalability and interoperability. And that has generated significant interest among developers. In fact, Polkadot is the second-most-popular blockchain project as measured by active developers, according to a recent report from Electric Capital. Only Ethereum ranks higher.

Presently, Polkadot is auctioning parachain slots to blockchain developers. The process started in November 2021 and will likely continue for several years. As that trend plays out, Polkadot’s ecosystem of software and services will continue to grow, incentivizing users and investors to join the platform. That should create demand for the DOT coin, pushing its price higher over time.

As a final thought, excluding Bitcoin and Ethereum, Polkadot was the most commonly held crypto asset among venture capitalists and hedge funds in the fourth quarter of 2021, according to research firm Messari. That highlights the enthusiasm surrounding this blockchain project.

Like Polkadot, the Fantom (FTM -0.05%) blockchain was designed to improve upon Ethereum’s lack of scalability. Its core innovation is the Lachesis algorithm, a PoS consensus protocol that allows the platform to process thousands of transactions per second. Better yet, those transactions cost a fraction of a cent, which is significantly cheaper than Ethereum’s average transaction fee of $8.

In short, Fantom is a highly scalable blockchain that offers interoperability with Ethereum, and that value proposition has caught the attention of the crypto community. Last year, Fantom’s developer base skyrocketed 389%, outpacing all other blockchain projects (excluding those with fewer than 50 developers). Likewise, DeFi investments have grown eightfold over the past year, reaching $1.2 billion. That makes Fantom the ninth-largest DeFi ecosystem in the blockchain industry.

In the years ahead, as Fantom’s ecosystem of software and services continues to evolve and more DeFi investors put money into products on the blockchain, demand for the underlying FTM coin should rise, driving its price higher. That’s why this cryptocurrency looks like a smart long-term investment.

Is XRP Crypto a Good Investment Now? No, There’s Too Much Uncertainty.

Is XRP Crypto a Good Investment Now? No, There's Too Much Uncertainty.