If the coronavirus pandemic sent a jolt of uncertainty through the heart of the sports sponsorship industry, perhaps nowhere was the impact more pronounced than in the agency sector.

Almost overnight, business ground to a halt. Events were cancelled, campaigns put on hold, contracts revisited and, in some cases, torn up. Inside agencies big and small, the sense of shock to the system was seismic, forcing businesses of all shapes and sizes to rethink both their internal structure and their value proposition. That, in turn, led to a period of introspection and consolidation, as evidenced by big-money mergers and significant acquisitions involving the likes of Creative Artists Agency (CAA), Wasserman and Two Circles.

Among those most exposed to the impact of Covid-19 was Endeavor, the owner of IMG and WME, two of the world’s largest agencies with vast, international networks, as well as travelling event promoters like the Ultimate Fighting Championship (UFC) and Professional Bull Riders (PBR). Notably, Endeavor was forced to seek emergency funding and make sweeping cuts to its workforce, including a reported 250 layoffs during the first lockdown. The headlines coming out of the company at the time painted the bleakest of pictures: net losses in 2020 had soared to US$625.3 million on the back of plummeting revenue.

Back then, the outlook for agencies was gloomy at best. Yet Endeavor’s scale was such that it was able to ride out the storm while other companies floundered. Both the UFC and PBR returned to staging events within weeks of the onset of the pandemic – thereby satisfying their respective brand partnership contracts and media rights agreements – while their parent company’s resilience was subsequently underlined by several counterattacking moves.

Having taken full ownership of the UFC earlier in the year, Endeavor defiantly pushed through its previously abandoned IPO in April 2021, raising more than US$500 million by listing on the New York Stock Exchange. At the time, Ari Emanuel, Endeavor’s chief executive who chose to forego the remainder of his salary in 2020 due to the increasingly dire financial situation, hailed ‘the power of the Endeavor platform’ after the company ‘brought commercial activity back online, guided our clients through an unprecedented set of events, and fostered innovation of new digital business models that will drive growth well into the future.’

Over a year into life as a public company, Endeavor’s business has continued to rebound. Since the IPO it has entered into a US$1.2 billion agreement to acquire OpenBet, a gaming platform that will help beef up its sports betting division, and completed its purchase of the Madrid Open, one of the world’s leading tennis tournaments. Meanwhile corporate spending on marketing and experiential activities, which had been virtually non-existent during the pandemic, has helped forge a path back to profitability.

Boosted by the return of capacity crowds at UFC and PBR events, Endeavor beat analyst expectations to post revenue of US$1.47 billion in the first quarter of 2022, up 37.8 per cent year-over-year. Revenue generated by its owned sports properties segment totalled US$296.7 million for the quarter, up five per cent compared to the prior year, with the uplift primarily driven by sponsorship, licensing, and event-related income. The UFC was a particularly strong performer in 2021, recording its best financial year in its 28-year history.

I’m honestly sitting here pleasantly surprised by how quickly things have bounced back.

When it comes to sponsorship specifically, pent-up demand for premium content and live events has helped restore momentum to Endeavor’s business, instilling a sense of optimism across a company whose sprawling portfolio offers plenty of opportunity for brands seeking touch points with consumers – from partnerships with elite sports properties and Super Bowl hospitality to major culinary festivals, international fashion weeks and art fairs.

“We’re very fortunate that we have a relatively even split between sport and entertainment,” says Robbie Henchman, IMG’s executive vice president of strategic partnerships. “Therefore, we have a nice variety of offering when we’re sitting in front of brands, and I’d like to think that we know the brands well enough as to who’s going to lean in what direction.”

He adds: “We operate across the board in terms of a variety of different verticals. I’ve genuinely seen a really nice and decent spread of commitments and spending across the board.

“It’s not like I’m not waking up with a small bead of sweat once in a while about different properties and different assets in different parts of the world. Clearly Asia, China specifically, is coming back slower, and there are certain areas of the world that are going to take longer to come back. Those are concerning but, at the end of the day, I’m honestly sitting here pleasantly surprised by how quickly things have bounced back.”

An IMG stalwart, Henchman began his career at the agency in 1995. Originally based in Hong Kong with a focus on the company’s golf business in Asia, he took responsibility for the entire Asia-Pacific region in early 2015, following IMG’s acquisition by WME to form Endeavor a year earlier.

In 2017, he relocated to London to oversee international strategic partnerships spanning an array of assets within the Endeavor network. Today, he heads up a multinational team selling sponsorship for the company’s portfolio of owned sports properties, including the UFC, PBR and the Miami and Madrid Open tennis tournaments, in addition to major third-party clients like Wimbledon, The Open, the Rugby World Cup and SailGP. 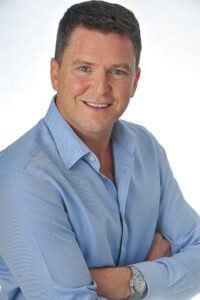 That broad remit affords Henchman (left) a unique perspective on the current health and trajectory of sponsorship globally, not to mention an informed view of the key challenges and opportunities facing brands, rights holders and agencies today.

“During the pandemic, I think a lot of smaller agencies weren’t necessarily able to survive, or they had to pivot,” he reflects now. “If those agencies represented some of the smaller assets or properties or rights holders, then it’s going to be challenging for those guys to bounce back.

“Many agencies were forced to reduce staff, including ourselves. One of the things that we’re finding very hard – and I believe it’s common, actually, across the whole industry – is rehiring people into positions that were either made redundant or furloughed.

One of the standout trends in the sports sponsorship space since the onset of the pandemic has been the rapid arrival of cryptocurrency brands and exchanges, and the influx of investment is showing no signs of abating. As Henchman notes: “There’s always a sector of the moment. At the moment it doesn’t take a genius to figure out that blockchain and crypto is the flavour of the month.”

In a recent survey of industry professionals conducted by SponsorPulse, 47 per cent of respondents identified crypto as the sponsorship category with the biggest growth potential – although it should be noted that six per cent said there’s a chance that crypto sponsorship could become non-existent in sport over the next three years.

While there are growing calls for independent regulation and the need for rights holders to conduct more thorough due diligence, Henchman believes blockchain and crypto are “absolutely here to stay”. But he also acknowledges that there are questions over the long-term sustainability of a sector that, while commercially very appealing, is both highly volatile and largely unfamiliar.

Viewing sport sponsorship as a viable means to build legitimacy and engage consumers on mass, many blockchain and crypto firms are seemingly paying over the odds to align with major properties across various sports. Naming rights deals, jersey sponsorships and other marketing plays have come thick and fast in recent months as rights holders have eagerly capitalised on a rich new source of income.

A recent Nielsen report projected that crypto, blockchain and NFT sports sponsorship investment will reach US$5 billion by 2026, a 778 per cent increase compared to 2021. In the NBA alone, crypto deals account for roughly 70 per cent of new sponsorship investment, according to research by IEG. Crypto is now the second highest-spending sponsorship sector in the league, with the likes of Crypto.com, FTX, Coinbase, Socios and their ilk spending more than US$130 million this season, compared to less than US$2 million in 2020/21.

“They obviously need a lot of noise and exposure at the moment in terms of what they’re putting out to the market,” Henchman says of those big-spending newcomers. “They’re paying either market value, or they’re competing at such an aggressive level that it’s difficult for traditional partners to perhaps keep up.”

It’s not like we’re coming out of the pandemic and everything’s cheaper – completely the opposite. It’s more expensive to get involved in some of these key events.

Indeed, the impact of this influx of new money is already far-reaching. Rights fees are being driven up by the increased competition, but a confluence of other factors is also conspiring to apply upward pressure on deal valuations. At a time when most marketing budgets are already being squeezed, costs are rising across the board, with the…

Siamrajathanee Public : Clarification on investment in digital asset Types of