What Is a Crypto Winter? 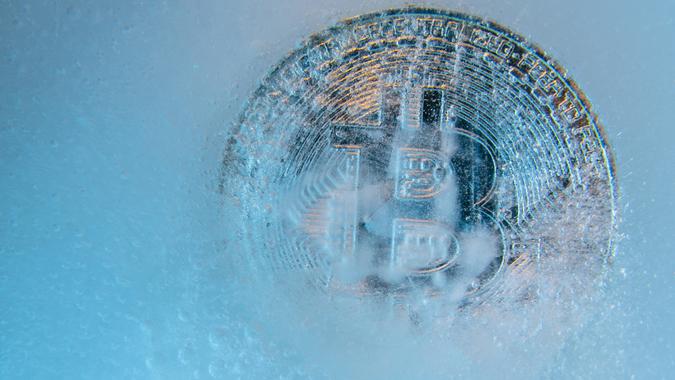 Fans of “Game of Thrones” will be familiar with the phrase “Winter Is Coming,” which essentially means bad things are coming in the form of a lasting conflict. That phrase became the genesis of another term these days – “crypto winter” – which describes bad things that are happening already.

See: Coinbase Announces Hiring Freeze, Rescinds Job Offers – Should You Move Your Crypto?
Find: Crypto Winter Is Here – How to Manage Your Assets During a Cryptocurrency Bear Market

In this case, those bad things are tanking cryptocurrency values. The two biggest cryptos, Bitcoin and Ethereum, have both plunged by more than 30% over the last week, Time reported. Bitcoin’s price edged close to $20,000 — its lowest level since Dec. 2020 and 70% off its high set in Nov. 2021. Ethereum’s price sank below $1,100, its lowest in a year-and-a-half and more than 75% below its all-time high, which also came in Nov. 2021.

CRYPTO OFFER: Buy Bitcoin and crypto instantly! Sign up for Gemini Crypto Exchange and start investing with as little as $100 today.

Those aren’t the only cryptocurrencies to hit the skids. Leading altcoins such as Cardano and Polygon are both off more than 60% year to date, Forbes reported. Major crypto exchanges like Coinbase and Gemini have also felt the pain, with both recently announce hiring freezes and layoffs. They were joined by lender BlockFi, which announced its own layoffs. All cited the arrival of a crypto winter.

Shares of Coinbase, the largest U.S. digital-asset trading platform, have fallen 86% from their 52-week highs. The company this week said it will lay off 18% of its workforce, Bloomberg reported. The layoffs follow an aggressive hiring campaign by Coinbase in recent years. This year alone it added about 1,200 employees — roughly the same number it now plans to lay off.

These developments have all contributed to the current crypto winter, which is the term used to describe a prolonged market slump. Since Nov. 2021, the global crypto market has dropped about 60%. Crypto winters typically begin with a dramatic sell-off from Bitcoin highs.

Like stocks, which entered a bear market this week, crypto has been hurt by high inflation and a growing sense of economic uncertainty tied to the war in Ukraine and ongoing global supply chain problems.

“The crypto market was already feeling the effect of world events, especially the Russia-Ukraine conflict that caused turmoil in global finance,” Igor Zakharov, CEO of DBX Digital Ecosystem, told Forbes. “By the time TerraUSD and Luna collapsed and set in motion a domino effect in the crypto world, crypto winter had already begun.”

This isn’t the first time the crypto market has faced a lengthy downturn. The last crypto winter lasted from January 2018 to December 2020 (that’s also when the term “crypto winter” first entered the lexicon). The good news is, that slump was followed by a long and steep growth trajectory for cryptocurrencies that peaked in November 2021.

See: Is Crypto a Reliable Source of Income for Retired People?
Find: What Is Crypto Mining and How Does It Work?

Will the same thing happen this time? Don’t bet on it, experts say.

“I don’t expect crypto to come roaring back as it did in 2021 because the tailwind of Federal Reserve monetary policy has actually become a headwind for the asset class,” Robert Johnson, professor of finance at the Heider College of Business at Creighton University, told Forbes.

Vance Cariaga is a London-based writer, editor and journalist who previously held staff positions at Investor’s Business Daily, The Charlotte Business Journal and The Charlotte Observer. His work also appeared in Charlotte Magazine, Street & Smith’s Sports Business Journal and Business North Carolina magazine. He holds a B.A. in English from Appalachian State University and studied journalism at the University of South Carolina. His reporting earned awards from the North Carolina Press Association, the Green Eyeshade Awards and AlterNet. In addition to journalism, he has worked in banking, accounting and restaurant management. A native of North Carolina who also writes fiction, Vance’s short story, “Saint Christopher,” placed second in the 2019 Writer’s Digest Short Short Story Competition. Two of his short stories appear in With One Eye on the Cows, an anthology published by Ad Hoc Fiction in 2019. His debut novel, Voodoo Hideaway, was published in 2021 by Atmosphere Press.

Kazakhstan Will Now Allow Crypto Exchanges To Have Their Bank Accounts | Bitcoinist.com