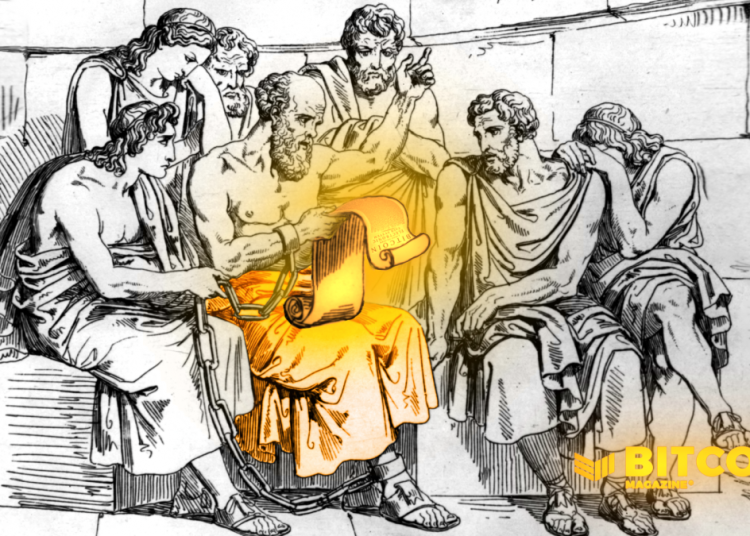 
This is an opinion editorial by Conor Chepenik, a contributor to Bitcoin Magazine.

Humans are derivatives of other humans. Initially, we learn how to act based on our parents’ behavior and as we get older we develop critical thinking skills and parrot the talking points of others that resonate with us. That is why choosing what you fill your mind with has never been more important. As humanity continues down the information technology revolution we need people focused on building new systems that prioritize love, liberty, freedom and fairness. I worry that our current system is filled with people trying to impose top-down controls or figuring out how to go viral.

But blaming people for wanting to go viral is a lousy argument.

“Show me the incentives and I’ll show you the outcome.” – Charlie Munger.

Some people with large online followings provide legitimate value, but the majority post half-truths in an effort to make their followers trust them. Not many influencers showcase their struggles because nobody wants to buy a product from someone who is miserable. Influencers need to sell the idea that you can have a life like theirs if you buy their course, product or whatever else they might be peddling. It takes a lot of curating to fill a social media feed with people who provide real value. If you don’t put in this time up front, your feed will be filled with products that are like altcoins: cheap knock-offs. Munger might be wrong about Bitcoin, but he was spot-on about incentives. Social media companies want to keep people scrolling on their platforms so they can monetize our attention. Thus, when you ask kids what they want to be when they grow up, the majority say a social media celebrity rather than a scientist, firefighter, astronaut, engineer or any other profession that benefits society.

So when did everything become so perverse that children are more eager to show off their life online rather than do a job that benefits society? It is impossible to pin this to an exact moment, but I’d argue it all started when the Bank of England decided to monopolize credit to fund their war efforts. This type of top-down control was the first form of quantitative easing and the inception of the credit-based fiat system, or “The Original Sin” as Saifedean Ammous calls it. Credit is never as good as gold, but when a bank acts like its credit is, the result is devastating. The incentives that came out of this have made the fiat system a truly sinister one. This quote from Ammous on The Lex Fridman Podcast is a perfect example of what happens when the entity with the biggest stick starts asking for value without returning the favor:

Unlike gold, credit doesn’t require proof of work. As Saifedean so elegantly points out in “The Fiat Standard,” one of the first bond sales for WWI issued by the Bank of England raised less than one-third of the bonds being subscribed. Rather than stopping the war the Bank of England gave their two top officials a line of credit and had them buy the remaining two-thirds of the bonds. Rather than provide actual value, the Bank used its monopoly on money to fund itself and continue fighting a war that its citizens clearly did not have an appetite for. This type of top-down control has had lasting impacts and has resulted in a lot of parasites gaining wealth without providing value.

As most people reading this publication know, another white paper was released in 2008 that cut out parasitic middlemen. A white paper that described a system not based on credit, but instead required providing value in the form of energy in order to obtain this new currency. This system required no third parties and allowed people to trade in a peer-to-peer fashion without a middleman butting in to take a cut. The incentives of this network called Bitcoin are so beautifully aligned that the longer the network exists, the more secure it becomes. It’s a truly incredible feat of engineering that has the power to completely undermine the current system of parasites and credit expansion. The fiat system has given rise to pointless wars and made saving and investing nearly inseparable. Satoshi Nakamoto gave the world inflation-proof money with some open-source software.

Under a Bitcoin standard, it would be very difficult to make money without providing real value. If you take away the incentives of aligning yourself next to powerful government officials, the world would be a better place. There will be no more backroom handshakes because no matter how much power or wealth one acquires one cannot change the rules of the Bitcoin network. Many will have to make a choice in the coming years about how they want to store their value. One system mines new currency via credit expansion while the other requires hardware and energy to do so. One system lets parasites thrive while the other just has rules that cannot be changed.

Even those who are lucky enough to reside in a wealthy nation still see their purchasing power destroyed in slow motion via inflation. If bitcoin is not adopted globally, humanity could end up in a never-ending cycle of war since the only foreseeable way to keep the fiat system propped up is through constant growth. Constant growth is not always attainable and fiscal stimulus is like crack: The first hit is fantastic, but then you need more to experience the same result. When everything starts to unwind and the system looks unstable the logical conclusion under a fiat standard seems to be to start a war. Fiat corrupts people over time. It’s not a gradual corruption, but it’s a slow and steady one, like the decline of the dollar. Fiat is so corrupting that House Majority Leader, Steny Hoyer, declared the United States is at war with Russia. There was no vote of Congress to declare war. It seems that when you have been in the fiat system for so long, you forget that other people expect you to play by the rules. I found this to be a perfect example of what a corrupt system does to those in it.

Bitcoin does the opposite to people. Recently, I found out my girlfriend was pregnant. The first thought that popped into my head upon hearing this was “Thank god for Bitcoin.” I know this sounds insane, but if there was no way to opt out of the rotting fiat system I would be horrified to bring life into this world. The second thought that popped into my head was “Wow I’m really going to be a Dad, I can’t wait to give my child a good life and raise them to be a good person.” Bitcoin taught me that low-time-preference activities are what lead to a fulfilling life. As far as I can tell there is nothing more low time preference than having children. There is a ton of uncertainty in the world and the only thing that seems to be guaranteed is Bitcoin adding blocks roughly every 10 minutes. Had it not been for bitcoin, I would not have felt comfortable in the decision to become a father. I’m not a math expert but I can tell that 30 trillion dollars of debt is so much money that even servicing the interest payment will be a massive challenge. Paying off the principal is starting to seem like a pipe dream as governments continue to run deficits and spend money they don’t have. When you really dig into the math it seems apparent why the House Majority leader is calling for war. They want a way to refinance their debt! Screw public opinion or the thousands of problems the United States has in its own country, politicians want war with Russia. War is not the answer to the United States’ problems, and it is more important than ever to adopt a system that doesn’t always lead back to war.

The incentives to go to war under the fiat system are powerful right now. Rand Paul was ostracized for delaying a $40 billion package, money we don’t currently have without borrowing, to Ukraine. According to NBC News, “Paul, a libertarian who often opposes U.S. intervention abroad, said he wanted language inserted into the bill, without a vote, that would have an inspector general scrutinize the new spending.” The reader can decide why the U.S. government would be so against letting an inspector general monitor where the money goes. My guess is because it is a lot harder to launder money when someone is overseeing how it gets spent. The more our government pushes for war instead of diplomacy, the more it becomes clear the game is rigged. You don’t usually see Republicans and Democrats on the same page, but there was a big bipartisan push to give Ukraine $40 billion, and the bill got pushed through despite Paul’s effort to get some oversight into how the funds will be spent. Imagine playing a football game and right after your team scored the winning touchdown the referee decided to change the rules of the game, which results in your team losing. Now imagine doing the right thing your whole life — saving, paying taxes, helping out the local community — and right before retirement, the government prints trillions of dollars and changes the game. At first, this might seem great as your assets skyrocket. When reality sets in shortly thereafter and inflation decimates people’s purchasing power, things get ugly. I’ve personally witnessed fiat make people bitter, resentful and perilous. I’ve also witnessed myself and others become more patient, loving and happy as a result of bitcoin. Bitcoin is what made me comfortable in becoming a father, effectively saving the life of my unborn child — and I imagine it can save the lives of many others.

USDC v. USDT – Is this stablecoin nearing its ‘Circle’ of life?