Recession for Dummies: What It Means and How It Affects the Crypto Market By DailyCoin 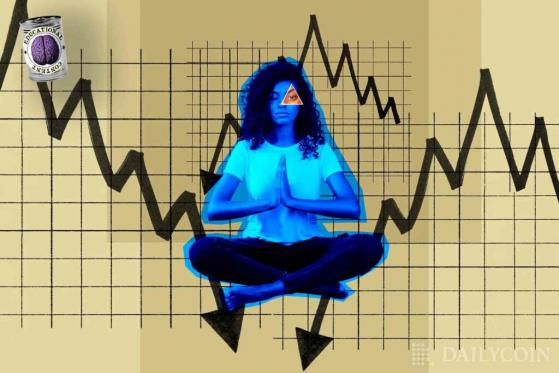 Recession for Dummies: What It Means and How It Affects the Crypto Market

Though there is only a slim chance that you haven’t heard the term “recession” before now – plastered all over the news as it currently is – it is possible that you aren’t entirely familiar with its premise. That being the case, let’s get into what exactly the financial term, which is largely presented to be extremely undesirable in economics, forbodes.

Before we go on to explain the basics, we want to make it clear that no part of this article represents financial advice, and DailyCoin does not act in that capacity. This guide merely serves as educational material to provide an outline one might need to know about recession, and how it generally affects the financial markets⁠—including crypto.

So, without further ado, what is a recession, beyond being the elements of a looming financial breakdown and extreme fiscal uncertainty that often results in economic crisis?

Understanding the Place of Recession in Economics

To begin this outline, it should be understood that the consequences of a recession, if not swiftly eased by the relevant authorities enacting the necessary stimulant economic measures, can be devastating to both a nation and its citizens. But how does an economy get to the point of recession in the first place?

Generally speaking, a recession, according to the National Bureau of Economic Research (NBER) simply refers to a significant economic downturn that permeates throughout vital areas of the economy, typically lasting for several quarters of a year or more, depending on the situation of the affected nation.

But to be more precise, a nation often faces recession when its gross domestic product (GDP) shows consistent decline for at least two fiscal quarters.

While a recession is most noticeable in a nation’s GDP, it is also characterized by other indicators, including inflation, declining levels of income/revenue, a rising level of unemployment, reduced industrial production, and dampened wholesale-retail sales, among other aspects.

It is also important to note that, when GDP consistently declines, it can be some time before people start to feel the hardship. So, for example, if a nation is facing down a recession, there is also a strong likelihood that inflation is looming around the corner, and when there is inflation, people end up spending more than they normally would in their day to day lives.

Similarly, a company struggling to stay afloat during an economic downturn may be forced to cut down on its operational costs, which may include laying people off, which in turn leads to an increase in unemployment rates, which feeds back into the economic downturn, and the chain goes on and on.

With that being said, no matter how bleakly the press may paint it, or its impact on the economy, a recession is a completely normal part of the business cycle and progression trend; all except for when nothing is done to ease the situation.

As the case may well be, a recession often results in an economic shift, or a major alteration in periodic financial projections.

What Are the Causes of Recession

Recessions are caused by a range of variables, the majority of which are financial in nature, but this does, of course, mean that recessions can occur by both “natural” and “artificial” means.

For instance, severe or extreme climate change can trigger a “natural causes” recession, while systemic economic collapse, technical shortages, and sluggish adoption of modern/revolutionized procedures, among other things, can trigger “artificial” recession. Either way, the following are typically major driving forces of recession in every nation.

One of the fastest ways to run into excessive debt is to keep borrowing; it is that simple. As you might expect, a nation that continues to borrow until it can no longer finance its debt is one loan away from recession. In many such cases of excessive debt resulting in recession, the nation’s growing debt significantly outweighs its GDP, thereby capsizing the economy.

There are instances where growing demand for an asset that lacks sustainable capitalization can lead to an unprecedented economic crisis. Using Ponzi schemes as an example, if people from all over the world invest in them, money flows out of one location and into another.

However, when such schemes fail, the specific individuals that invested in them are not the only ones who lose money; the victim’s nation also takes the fall, as money leaves the country’s economy with no exchange of value. Similarly, when people invest in asset bubbles, often driven by emotion and irrational exuberance, one can easily predict looming recession, especially when the bubble bursts, causing prices to tumble, and panic selling kicks in.

Hyperinflation starts with “regular” inflation, and is capable of causing a nation to fall into recession. Generally, inflation refers to an upward trend in the prices of goods over a period. While this is not completely out of place, excessive inflation can be very dangerous, especially when a significant portion of the population lives in abject poverty, or far below the level of average income.

While hyperinflation is unfavorable for the economy, excessive deflation can lead to a worsened situation. When excessive deflation occurs, the prices of goods and services fall rapidly, and, if the deflationary feedback loop becomes too strong, individuals and businesses may stop spending altogether.

Generally, in these situations, the economy is undermined by people not spending, resulting in a sharp decline in production, and, in extreme situations, a recession may kick in.

This one might be a bit of a head scratcher, after all, it’s quite odd to imagine how technological advancements could also lead to recession, right? Although breakthroughs in revolutionary technology usually increase productivity in the long run, the early stages, which largely involve its adoption and adaptation, can take a while.

That said, the period of transition between the launch of a revolutionary technology such as blockchain, Web 3.0, 5G internet, AI, AR, etc, can often give rise to less productive systems, ultimately leading to sluggish economic drive and, in the end, recession.

There are several factors capable of triggering economic shock, the majority of which are artificial, or driven by specific governmental actions. For instance, actions such as increasing tax rates, tariffs, or the prices of high-demand goods, such as gas or fuel, can all potentially trigger a recession.

While economic shocks aren’t typically invoked by the government, some can happen as a result of natural disasters or epidemics. Think of the COVID-19 pandemic, the ensuing lockdown, and its overall impact on the global economy.

How to Predict a Recession Before It Happens

There are many ways to predict a recession even before it happens, and some warning signs in particular can suggest that a recession is imminent.

A looming economic crisis or recession may be indicated by signs in the data, such as an inverted yield curve, which typically denotes a significant risk to the economy—though ususally more short term. Likewise, declining consumer confidence, a sharp decline in the stock market, rising unemployment, and a decline in the ‘Leading Economic Index‘ (LEI), are among other factors that can help in determining whether a nation or economy is about to face recession.

How Does Recession Affect the Crypto Market?

First of all, it is important to note that the global crypto market, even at its all-time best, is worth only a fraction of the global economy. For more context, the crypto economy topped $3 trillion in market capitalization during November 2021, the highest it has ever recorded to date, though it sits below $1 trillion at press time.

By comparison, the global GDP amounted to approximately $94.93 trillion in the same calendar year, roughly 10% higher than what was recorded in 2020.

Clearly, there is a wide margin between the centralized and decentralized economies. As such, the crypto market may yet be too small to cause a recession in the global market by itself. On the other hand, if the traditional markets suffer the same fate, it could have cataclysmic consequences for crypto. In the end, the risk of exposure may vary depending on the market.

The crypto market, just like the traditional market, is not exempt from the woes of economic crisis or recession. Naturally, those most affected in the crypto market during a window of recession would be the investors, both individuals and institutions alike.

When there is an economic crisis of any magnitude, there is a high tendency among investors to attempt to offset their high-risk investment. Sadly, for most investors, especially individuals, crypto investment are considered “high-risk”, and may be among the assets to suffer investment retraction in a recession.

Among other things, investment retraction can result in panic selling, which itself leads to heavy drops in the price and value of the majority of crypto assets in the market.

Recession can also affect the crypto market in terms of human capital. To put this another way, as the rate of crypto adoption grows, more projects spring up, and job opportunities within the space follow, but the same is true in the opposite direction.

When a crypto organization relies heavily on crypto-dominated reserves, especially non-stablecoins, the risk of being washed away by the effects of recession is high. If such a company looks to cut costs, as mentioned above as a common consequence, it may eventually result in widespread layoffs or, at the very least, pay cuts across the board. In the former case, rising unemployment may be on the horizon.

How to Stay Afloat During Recession

A recession usually leads to…

Read More:Recession for Dummies: What It Means and How It Affects the Crypto Market By DailyCoin