Where Big Money is Flowing in Crypto


Bitcoin (BTC-USD) may have stalled out around $21,000 the past few days… But that doesn’t mean money isn’t moving behind the scenes. Today we’ve got Tether (USDT-USD)…Goldman Sachs…and even a Solana (SOL-USD) smartphone in the crypto news! 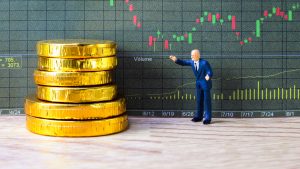 According to yesterday’s Wall Street Journal: “The short trades are almost exclusively put on by traditional hedge funds in the U.S. and Europe, while crypto firms—especially those based in Asia—have been happy to facilitate the other side of the transactions,” said WSJ’s source at Genesis Global Trading.

Tether is still the biggest stablecoin by market cap today. And it was initially a safe haven for capital fleeing its failed, algorithmic competitor TerraUSD (UST-USD) in May. But stablecoin watchers have long complained that Tether doesn’t have enough cash backing it.

USD Coin (USDC-USD), which has way more, is gaining fast. USDC has reached a $55 billion market cap, with Tether down to $66 billion.

Also struggling: The Grayscale Bitcoin Trust (OTCMKTS:GBTC) is now -33% in the past month, while bitcoin itself is -28%. Currently based on BTC futures, Grayscale would much rather base GBTC on the “spot” price, and awaits approval (or denial) from the SEC on July 6.

While nearly 11,400 people have written the SEC in support of this move… The pricing gap between GBTC and actual BTC suggests that traders are betting it’ll be yet another “No!” from the SEC next week.

FTX and Even Goldman Sachs Are Looking for Juicy Deals

Goldman Sachs is looking to broker a deal in which “Web3 crypto funds, funds specializing in distressed assets and traditional financial institutions with ample cash on hand” would buy $2 billion worth of assets from Celsius Network (CEL-USD), as CoinDesk reported Friday.

For those keeping track at home, Celsius had $12 billion under management as of May – but turned out to be way overleveraged in the event of a crypto crash. (You know…like the one we’ve had now.)

Context: The “crypto bank” is so illiquid that Celsius accounts are STILL “paused” for 15 days and counting.

Knowing that its customers were in it for the yield, Celsius claims that the customers are still racking up rewards on their savings. But for users, it “is honestly insulting” to get notifications that “Celsius Network is still paying weekly rewards while holding my crypto hostage,” as one tweet put it that was cited in Cointelegraph.

As for Goldman’s hopes of raising $2 billion to scoop up Celsius assets at a discount… Blockworks reported that “its initial response was not favorable.” Stay tuned, I guess!

Meanwhile: The crypto celebrities over at FTX (FTT-USD) would really, really like to acquire Robinhood (NASDAQ:HOOD), as an anonymous source told Bloomberg yesterday.

FTX’s CEO, Sam Bankman-Fried, already holds a 7.6% personal stake in Robinhood. But he was the first to set Bloomberg straight: “There are no active M&A conversations with Robinhood,” even if “we are excited about Robinhood’s business prospects and potential ways we could partner with them.”

“My theory is that Robinhood has what this crypto-trading mogul wants: a sizeable options-trading business,” as I wrote to you in May, when SBF’s stake was revealed. And at the rate he’s been making moves lately, I wouldn’t be at all surprised if we DO see some big FTX/Robinhood news soon!

Crypto Market Cap is Bouncing Off Its Lows

In the May/June crash, the cryptocurrency market seems to have made a low around $775 billion in total (on June 18). Now, crypto market cap has bounced back to around $1 trillion.

The trajectory we see in the three-month chart above strongly correlates with BTC prices – so it’s not just BTC that off the lows lately.

Bloomberg credits this to the “Ether (ETH-USD) Recovery,” as ETH is up about +14% in the past five days. That comes with a +16% gain for companion chain Polygon (MATIC-USD) and +20% jump for “Ethereum killer” Avalanche (AVAX-USD).

The big picture: The total crypto market cap was $2 trillion as recently as April. But you’ll recall $1 trillion as the much-celebrated milestone reached as we rang in the New Year 2021. (The 2018 high was a $690 billion market cap, for comparison.)

If you were looking for crypto’s “iPhone moment”…then Solana says it’ll have one for you in “early 2023.”

That’s when you could be among the first owners of a new Saga Android phone, “tightly integrated with the Solana blockchain.” Indeed, these pioneering “Web3 phones” were developed by a subsidiary of Solana Labs itself: Solana Mobile.

Most importantly, there’s a “Seed Vault [that] keeps private keys, seed phrases and secrets separated from the application layer yet still capable of interacting with apps running on the device or in a mobile browser.”

Those apps are coming soon to Android’s Google Play – the biggest app store by total products offered – via the Solana Mobile Stack, now available to developers.

Bottom line: “Opening up crypto to mobile will lead to greater adoption, better understanding, and more opportunities,” as Solana co-founder Raj Gokal put it in the Saga announcement. Solana will have to step up its network uptime if it’s going to be the blockchain to do this. But overall, this is exactly what we want to see happening in the New Digital World.

Quote Of The Day

“Bitcoin has shown solid support at $20,000 five separate times. The market was basically asking: Are you sure you’re ready for this to collapse? Investors said ‘no.’”

So…are we about to head (back) to the moon? It’s all about inflation, say Luke and Charlie in their latest update to their Crypto Investor Network.

If inflation doesn’t get under control, risk appetites just won’t be there – and, frankly, most households simply won’t have any spare coins, so to speak, for crypto.

In the meantime, a breakdown to $10,000 BTC is looking less likely, because “stagflation” looks less likely, conclude Luke and Charlie. “We think cryptos go sideways from here into the end of the year, before soaring in 2023, 2024, and 2025.”

But while we wait… Roughly “90% of cryptos will get wiped out over the next six months as BTC consolidates. The ~10% that survive the consolidation – the high-quality altcoin projects – are positioned for huge gains into 2025.”

Click here to watch Charlie’s free presentation on how they spot those high-quality cryptos – like the one they just issued to the Crypto Investor Network.

On the date of publication, Ashley Cassell did not have (either directly or indirectly) any positions in the securities mentioned in this article. The opinions expressed in this article are those of the writer, subject to the InvestorPlace.com Publishing Guidelines. To have more news from The New Digital World sent to your inbox, click here to sign up for the newsletter.