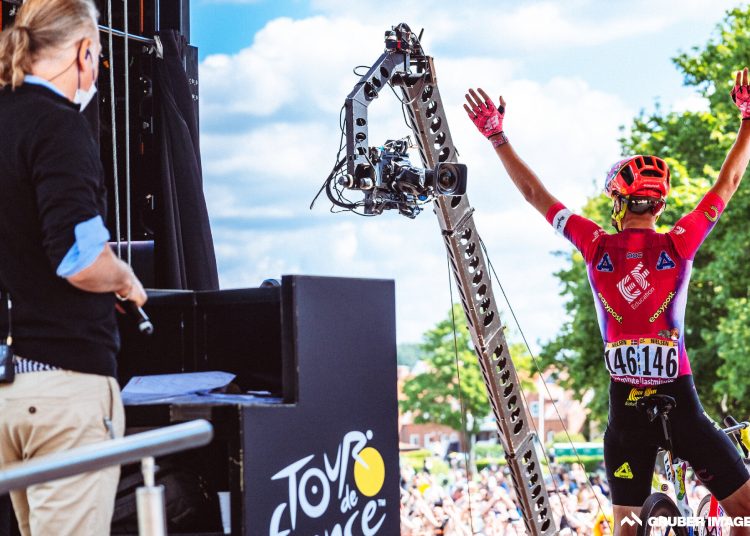 
“We spoke about it when we got here and it was Magnus’s own idea,” EF Education-EasyPost sports director Matti Breschel said of Magnus Cort’s plan, hatched the night before stage 1: to take the king of the mountains jersey during the Dane’s home Grand Départ.

“We went through the stage, talked about the day after, the whole Tour in general, whatever makes sense,” Breschel went on. “Charly [Wegelius] and the rest of us supported it totally, and so far everything has worked out pretty well. That’s cycling: you adapt into all the situations you are in and so far the plan has worked out quite well.”

While you have to scroll down the general, points and youth classifications, only one rider’s name is listed in the king of the mountains classification: Magnus Cort.

After making the day’s break on the very first road stage of the Tour de France, Cort swept up the solitary point on offer at the top of the first two fourth-category climbs. On the third and final climb of the day he celebrated, arms in the air, as if he’d just reached the summit finish of Alpe d’Huez and won the stage. Yet that was his finish line for the day. He had secured maximum points and a leader’s jersey at his home Grand Tour.

Magnus Cort was already a fairly big name in Denmark, his stage win at the 2018 Tour capturing the general public’s attention, a Danish journalist pointing out that of the bigger Danish names in the peloton, Cort is one of the only ones to have won a Tour de France stage.

He’s from Bornholm, an island of 227 square miles that’s also 100 miles east of Copenhagen and the Danish mainland. The main occupation amongst the 40,000 residents is either dairy farming or arts and crafts such as glass production.

“Magnus is a lot less extroverted off the bike than he seems on it,” Charly Wegelius told CyclingTips after his rider took centre stage to delight home crowds. “We asked him yesterday if he had a good time and he said ‘yes’. So he seems to be a bit more expressive on the bike than off it.”

“I mean he has a sense of humour that’s for sure, it’s quite dry,” Wegelius qualified, Cort’s honest hotel room reviews on social media as he travels the world racing bikes are admittedly hilarious. “He’s not super outgoing, you know? But he’s definitely got a sense of humour. If you ask him a straight question you get a straight answer.”

Stage 3. The peloton set off from Vejle before making their way south to Sønderborg on the final day in Denmark. One man made the breakaway. Magnus Cort.

Once again, he swept up all three KOM points on offer, a one-handed celebration as he crested the final climb this time, before showing three fingers to the camera.

“He went out there alone, the peloton took it easy, he decided how hard he wanted to go, and nine out of ten times the peloton will come from behind, so it was only a matter of time,” Breschel explained. “It was good that he got six or seven minutes so he could find his rhythm and get all of the points today, and then in the end he sat up to save his legs.

“I tell you, this is an experience he won’t get in his life again,” Breschel continued, a former pro and a Dane himself. “He’s getting everything out of it, he enjoys it so much. It’s obvious in the pictures that everyone is cheering for him, he’s smiling and waving and it’s the whole Magnus Cort show today. It’s really nice for him.”

“It’s nice that we had the chance to give him the space to do that,” Wegelius added. “And I think he’s put on a great show and he’ll remember it for a long time.”

The story isn’t quite over yet, however. Cort will now wear the polka dot jersey into France and the red and white spots are synonymous with the race.

But how long can he keep hold of it? Tuesday’s stage four has six fourth-category climbs, so another rider could at least tie his total.

“I think it’s manageable on stage 4,” Breschel said. “As I think the last one the peloton will be together, and then he’ll have the jersey for the cobblestones which will be ideal.”

Not only can Cort keep the jersey but Wegelius has indicated that the team wants to and Cort won’t necessarily have to form a one-man break every day to do so.

“You can defend the jersey in a different way,” he said. “Less by going out there yourself but by controlling people who come close. So you basically remove the nearest rival each day so you shuffle around the next person who’s well placed [to contest the jersey].”

The success in Denmark doesn’t take the pressure off EF Education-EasyPost, but it’s something that can provide the squad with a foundation to build on.

“It’s something we’ve done in the past, we did in 2017,” Wegelius said. “It creates a positive feeling around the team. If this is all you achieve in the Tour it doesn’t make it a good Tour, but it goes some way to sort of keeping the pressure down before the key moments arrive. And I think for teams that don’t do anything until a day [late in the Tour] it’s a long way [to go], it puts a lot of weight on that moment. It puts a smile on peoples’ faces and I think for Magnus it’s very nice personally. It creates a lot of positive energy on his side too.

The last words we’ll save for Cort himself, the man who entertained not just Denmark but all who’ve watched the Tour de France’s opening days where proper action has sometimes been at a premium.

“I really had a blast today. It was amazing!” the mustachioed Dane said after stage 3. “At first I was a little bit surprised [that he was alone in the break] but then I thought ‘that’s really nice’. Then I knew it would be a big amazing day out with the crowd and I knew what to expect from yesterday’s stage. Even being there alone and in the mountain’s jersey, it was unbelievable. A perfect day. It helps when people cheer you on like that.”

It’s safe to say after his display this weekend he’ll have a lot more people on the roadside in France waiting to cheer him on too.