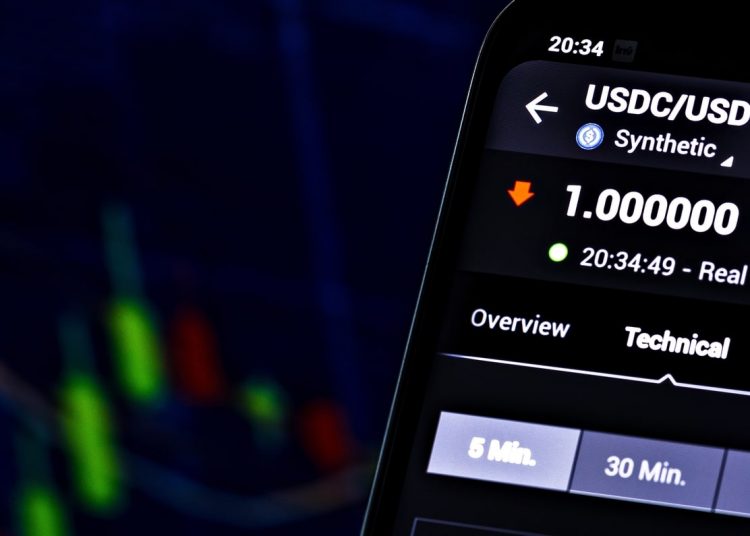 
Circle, the US-based payments company that issues the stablecoin USD coin (USDC), has denied that it is facing any sort of difficulty in maintaining the coin’s US dollar peg. Meanwhile, the supply of tether (USDT) coins on one of the most used stablecoin liquidity pools remains elevated.

Writing in a Twitter thread on Saturday, Jeremy Allaire, the CEO and co-founder of Circle, said that the company has decided to boost its information-sharing efforts in light of the “fundamental challenges and risks” that many companies in the crypto space have faced.

In the thread, Allaire linked to a blog post titled “How to Be Stable,” where the company went into detail on the backing of USDC. Among the key points, the post claimed that “USDC has always been backed by the equivalent value of U.S. dollar denominated assets.”

“The USDC reserve is held entirely in cash and short-dated U.S. government obligations, consisting of U.S. Treasuries with maturities of 3 months or less.”

The Circle CEO stated in his Twitter thread that it is “understandable why some users would be paranoid given the history of hucksters in crypto.” He further said that he has observed “some obvious confusion” between USDC reserves and the stablecoin itself.

USDC’s reserves are “regulated,” Allaire said, explaining that this includes rules on what assets Circle can hold as reserves, as well as where they can be held. Meanwhile, USDC itself is a stablecoin used in lending markets “away from Circle,” he said.

“Circle is in the strongest position it has ever been in financially, and we will continue to increase our transparency,” the Circle CEO concluded his thread by saying.

The thread came after some Twitter accounts in recent weeks have shared rumors about Circle, claiming that the company is facing difficulties in maintaining USDC’s US dollar peg.

In a statement to Cryptonews.com last week, a Circle spokesperson said that the company’s business remains “strong,” and that Circle is committed to “building trust and providing full transparency.” The spokesperson further referred to monthly audits of Circle’s reserves by auditing firm Grant Thornton LLP for details on USDC’s backing.

Meanwhile, the world’s most popular stablecoin USDT, issued by Tether, continues to be under pressure in the secondary market, Bloomberg reported on Sunday.

On the stablecoin swapping protocol Curve (CRV), USDT’s share of the supply in a liquidity pool for USDT, USDC, and DAI still remains above the level from before the Terra (LUNA) collapse.

The elevated supply of USDT indicates some hesitation among traders about holding it, Edu Patel, CEO of crypto investment platform Mudrex told Bloomberg.

Tether has denied that there is any reason to doubt its reserves, while claiming that some hedge funds are trying to profit from spreading fear in the market. The company’s chief technology officer Paolo Ardoino said on Twitter in June that Tether is following up on its commitment to “phase out [commercial paper] exposure and move into US Treasuries […].”

– Regulatory Clarity, More Transactional Use Could Boost Stablecoin Adoption – Crypto Summit Panel
– USDT vs. USDC vs. UST: How Do They Compare?