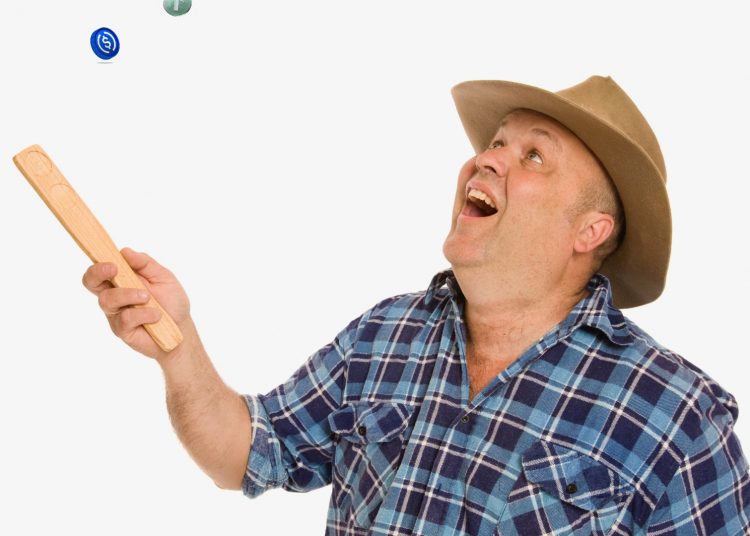 As USDC and USDT fight for stablecoin flippening supremacy, the July 4 Bitcoin and crypto-market exuberance has fizzled out today.

And that’d be partly due to the inversely correlated US Dollar looking particularly strong and the resumed US stock market indices looking about as potent as a firework in Sydney’s recent weather.

At the time of writing, the tech-stock-heavy Nasdaq and S&P 500 are -1% and -2% down respectively, whereas the US Dollar Index (DXY) is up 1.53%, breaking that resistance US trader Gareth Soloway mentions in his tweet, above.

This is the monthly chart, and 12-20 months is a long time. So it’s very likely that we will see several relief rallies from crypto during this time.

Just because the DXY is trending higher doesn’t mean risk assets can’t stabilize or even rally.

So… “macro” movements continue to be a wet blanket for markets. And an ice-bucket challenge (pfft, remember those?) might well be thrown on top when the next lot of US inflation data (July 13) and the Fed’s next rate-hike announcement (July 26-27) arrive later this month.

Still, the crypto rebellion is built on its strong HODLer base, which, judging by Glassnode’s latest research, appears to be hodling its resolve extremely well as the bear market carries on.

• There’s a tussle for the title of Bull Goose Stablecoin* near the top of the table, with USD Coin (USDC) looking like it could usurp the leader Tether (USDT) in a matter of months, if not weeks. (*Not an actual title.)

USDC’s market cap has grown almost 16% since May 10, hitting US$55.9 billion, whereas USDT’s has sunk in that time, falling more than 20% from its peak around that same date, to where it sits now at a shade above US$66b. Above and below: a tale of two stablecoins, courtesy of CoinGecko.com data. These are significants stats in a shaky market that craves stability and confidence in its dry-powder-holding, supposed safe havens after the collapse of Terra’s algorithmic stablecoin UST, and the subsequent crypto contagion.

The top stables have both copped a good deal of criticism and “FUD” regarding their reserves and potential “bank run” susceptibility. But unlike UST and other “algos”, both are fiat-backed (also partly by commercial paper) and audited – albeit to different levels.

USDC, owned by Circle, is registered with FinCen and at least 46 US state regulators and is audited by renowned global accounting firm Grant Thornton. USDT’s auditing isn’t presently regarded as rigorous, however, with its reserves conducted quarterly by accountancy firm MHA.

• Meanwhile USDD, an “overcollateralised” stablecoin algorithmically tied to TRON’s TRX token, lost its US dollar peg a few weeks ago, dipping as low as $0.92 on June 19.

Up until about June 15, the stablecoin had been overwhelmingly collateralised with TRX, with some USDC, however, it’s reportedly altered its reserve-backing model to a more even spread across TRX, USDC, Bitcoin and USDT.

With the overall crypto market cap at roughly US$917 billion, down 0.8% since this time yesterday, here’s the current state of play among top 10 tokens – according to CoinGecko. This has occurred at:

• At the end of corrections in 2021 which preceded more down

“Is the BTC bottom near? Maybe. Maybe not. What I’m certain about is that I cannot afford to be away from the market as it inches closer and closer towards its generational bottom. The opportunity cost for not paying attention to this BTC retrace is too high.”

Sweeping a market-cap range of about US$7.6 billion to about US$366 million in the rest of the top 100, let’s find some of the biggest 24-hour gainers and losers at press time. (Stats accurate at time of publishing, based on CoinGecko.com data.)

To finish, a selection of randomness that stuck with us on our daily journey through the Crypto/financial Twitterverse…

Hint: It’s not what they tell you. pic.twitter.com/0iDu5b0Pp5

Meanwhile, American economist Jim Cramer over on US financial channel CNBC… He goes from being pretty damn bullish on the likes of Bitcoin and Ethereum on April 28, to sweeping statements a couple of months later about crypto having no value whatsoever (below). Maybe he was rekt on LUNA.

Bottom signal? Probs not. But Cramer’s a known “market cooler” – there’s even an “Inverse Cramer” ETF based on doing the opposite of his stock picks.

Maybe if the crypto market stages a significant relief rally in the next few months he’ll be calling Bitcoin the best invention since the wheel and sporting a cartoon NFT profile pic… and it’ll be about time to sell again.

That said, his current sentiment probably reflects a fairly broad view of crypto from non-crypto people the moment.

It’ll bounce back eventually (erm, not financial advice), but here’s where we’re at for now…