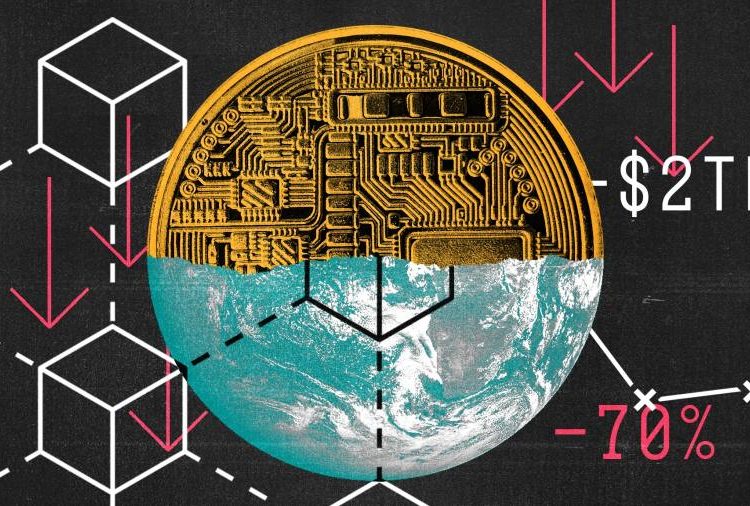 
Ethan Buchman, co-founder of blockchain network Cosmos, is doing his best to sound stoic. Since January, the collapse in cryptocurrency prices has wiped 80 per cent off the value of the atom tokens that underpin Cosmos, slicing $10bn from their total worth.

“Some people get shaken out, some people get scared,” Buchman says of the price collapse in the tokens, which are used to secure the network. “But others see it as an opportunity to double down on what they believe in.”

“It is always a scary moment for everybody [when markets crash],” adds Joseph Lau, co-founder of another blockchain company, Alchemy. He insists that the falling crypto prices don’t mean that all the projects involved are doomed, or that developers working on them will lose interest. The fall in prices doesn’t mean crypto projects will not get “traction in the long term”, says Lau. The people working on them “are building no matter what the prices are”.

But if Lau and Buchman are wrong, the crypto revolution could be stopped in its tracks. This year’s market collapse — part of a broader retreat from risky financial assets in the face of rising interest rates — could seriously weaken the incentives that have made crypto one of the hottest corners of the tech world.

No two tech manias are exactly alike. But the market collapse and the claims that it will not derail the crypto revolution recall another seminal moment in recent tech history: the dotcom boom and bust at the turn of the century.

Both bubbles were sparked by a supposedly revolutionary technology that would weaken control over online activity by the political and business establishment, ushering in a decentralised online world in which power would flow to the people. In crypto’s case, something that began as a vision of digital money around bitcoin has broadened into a movement known as Web3. It holds that the same underlying blockchain technology, which records and tracks crypto assets, will support a new generation of user-controlled online services that will dethrone today’s internet giants.

Decentralised finance is an umbrella term for a collection of crypto asset projects that aim to do away with a centralised intermediary — like a bank or an exchange — to provide financial services. They use a new form of distributed application, known as a DApp, to execute common services such as lending, savings accounts and trading coins.

There are also close parallels in the financial busts. The total value of all cryptocurrencies peaked in November last year before falling around 70 per cent, cutting $2tn from their value. Bitcoin, which accounts for some 42 per cent of the $900bn that remains, may dominate the headlines, but many other digital assets make up the crypto world. In the eight months after dotcom stocks peaked in early 2000, publicly traded internet companies are estimated to have lost $1.7tn, or 60 per cent of their value.

Stephane Kasriel, the head of commerce and financial technologies who oversees blockchain efforts at social media group Meta, is among those who argue that when the dust settles, crypto mania, like the dotcom bubble, will turn out to have been the manic precursor to a more stable and lasting tech revolution.

“A lot of these technologies go through the same hype cycle,” he says, with early euphoria and speculation followed by a bust. But, he adds, like the web at the start of the century, the underlying blockchain technology is something that “solves a real problem for people” and will be “useful for the world in general for a very long time”.

That is not a universally held belief. Exactly what that “something” is — or what uses it could be put to that are not already possible with today’s technology — is not absolutely clear. So far, crypto tech has been used mainly for financial speculation, criminal activity, decentralised finance or DeFi (which exists outside regulation) and the creation and trading of unique digital tokens called NFTs, which have been through their own boom and bust.

“A lot of the language [about decentralisation] is an almost exact replica of what we talked about in the 1990s,” says Martha Bennett, who at the time was head of advanced technology at UK insurance group Prudential. But she points to a fundamental difference between the early days of the world wide web and Web3 now: “We already had lots of utility by 1995 — we had email, we had lots of information online. With Web3, we have none of that.”

Bennett, who now analyses new technologies at Forrester Research, says it is probably still too early to judge whether anything lasting or useful will survive. But a growing chorus of critics in the tech world argue that — unlike with the dotcoms — the tech underlying crypto has no redeeming features at all.

A group of 26 computer scientists and academics wrote to members of the US Congress in May to warn that the technology was “risky, flawed and unproven”. Bruce Schneier, a computer security expert and one of the authors, says that any application built to run on a blockchain would be more practical, cost-effective and secure if it was based on other technologies: “Whatever it is you’re doing, it’s better without blockchain,” he says.

The crypto boom drew its power from new technology, anti-establishment social forces and powerful financial incentives that combined in an era of loose money to produce an explosive mix. With that era apparently over, it is now entering a challenging new phase.

Summing up the case against crypto and Web3, Phil Libin, a computer scientist and former chief executive of Evernote, the note taking app, describes the forces that inflated the bubble as: “80 per cent greed, 20 per cent ideology and zero per cent technology”.

A blockchain co-founded by Vitalik Buterin, a Canadian-Russian computer scientist, Ethereum is at the centre of Web3 efforts to turn blockchains into more than just a database of transitions. Its technology can hold assets, enables programmers to code functions for buying and selling into smart contracts, and also provides the building blocks for most DApps for finance. Ether, the token associated with Ethereum is the world’s second-most actively traded cryptocurrency.

The enthusiasm for crypto in the tech world rests on a belief that blockchains — open, distributed databases that can in theory be updated by anyone — represent a new foundation for online activity. Public blockchains use specially designed “consensus mechanisms” so that participants can agree updates are accurate. Fans claim these blockchains — and the cryptocurrencies used to validate the updates — will be the foundation for a new set of online services in which users, rather than corporations or governments, are in control.

Yet even Web3 advocates admit that existing blockchain technology is woefully inadequate when it comes to supporting mass online services. The Ethereum network, which is at the centre of much Web3 activity, can handle a maximum of only 30 transactions a second, while newer, faster networks such as Solana have yet to prove themselves. The technology is difficult to use for non-experts and is beset by unresolved privacy, security and legal questions.

Supporters say this is the result of technological immaturity rather than any fundamental flaw. Juan Benet, chief executive of Protocol Labs, whose Filecoin network acts as a decentralised marketplace for computer storage, compares today’s blockchains to the early days of cloud computing. The cloud was already the subject of widespread interest in the tech industry in the 1990s, he says, but it “took 20 years to build” before it was seen as a serious alternative. A similar technological “maturation” lies ahead for crypto, he predicts.

In the process, however, the ideal of decentralisation imagined by crypto enthusiasts risks being diluted to the point where there is little to distinguish it from the technology it is seeking to replace.

One widely touted switch could see “proof of work” mechanisms (which involve “miners” competing to solve cryptographic puzzles to verify new entries on the blockchain and consume vast amounts of power) replaced by “proof of stake” systems (where people who already own a cryptocurrency control how the network is governed). By definition, proof of stake systems hand most of the power to the wealthiest, undermining the ideal of distributed power that crypto systems are meant to enshrine, says Libin.

The new tech infrastructure being built on top of blockchains is designed to make them easier to use and able to handle many more transactions. But it also threatens to weaken their decentralised nature. It could give rise to a new set of dominant companies that act as the “gatekeepers” controlling access to the technology in the same way that the Big Tech companies rule today’s online world, says Bennett at Forrester.

Any creeping centralisation of Web3’s supposedly distributed computing platform would echo the trajectory of the web that preceded it. The open communication protocols on which the internet is based prevent any government or organisation from exerting control. Yet the system has left plenty of opportunity for private companies to build empires on top of tech foundations that promised, but failed to deliver, a more democratic online world.

This helps to explain why, despite the rhetoric that casts Web3 as an existential threat to the existing internet giants, companies such as Meta are dipping their toes into the blockchain pond.

“It’s always been a combination of things that are centralised and things that are decentralised,” Kasriel says of the technology on which the social networking company, previously known as Facebook, is built. Its plans now include creating a…

Read More:Will the crypto crash derail the next web revolution?