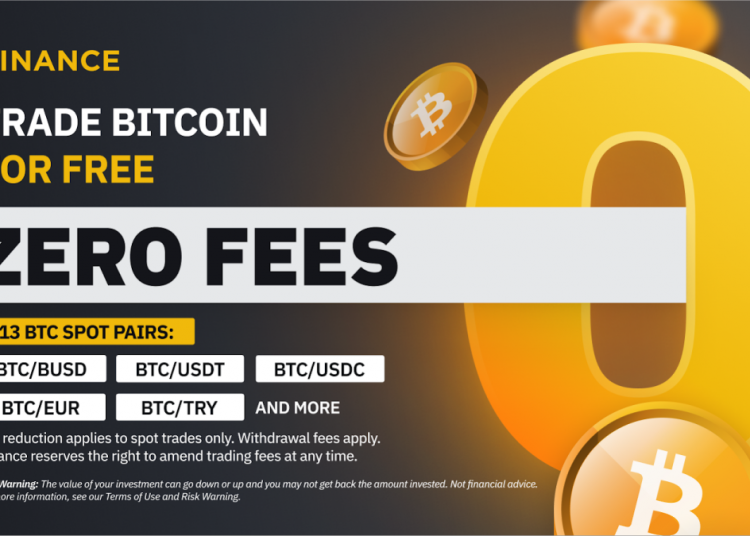 
Binance will remove bitcoin trading fees in its global platform in celebration for its fifth anniversary.

The move by the world’s biggest cryptocurrency exchange comes on the heels of a similar strategy enacted by its U.S. subsidiary, Binance.US. Late last month, the American firm squashed fees for spot bitcoin trading as it sought to increase its presence in the country and fire up competition. U.S. rival Coinbase’s stock took a hit after the feature was announced.

Binance’s move covers more ground than its U.S. counterpart. The global exchange said in a press release on Wednesday that starting on July 8, 2022 users will be able to trade spot BTC with no fees in 13 pairs, among fiat currencies and stablecoins, including the euro and the British pound as well as the two most popular stablecoins in the market: Tether’s USDT and Circle’s USDC. Traders can get the fee cut benefit with U.S. dollars only at Binance.US.

“In line with our user-first philosophy, Binance has always strived to provide the most competitive fees in the industry,” Binance founder and CEO, Changpeng Zhao, said in a statement. “At its core, Binance is an inclusive platform with accessibility in mind. Eliminating the trading fees on selected BTC spot trading pairs is another move towards that direction.”

Other fiat currencies that will also fall under the new fee-free rule include the Brazilian real, the Australian dollar, the Russian ruble and the Turkish lira. The feature will be live “until further notice,” Binance said.

Despite providing a convenient Bitcoin on-ramp, centralized exchanges can become a security hole if leveraged as custody providers by users. Those interested in reducing risk can mitigate exposure to third parties by securing their own bitcoin – which, despite the learning curve, can prove advantageous over the long run.