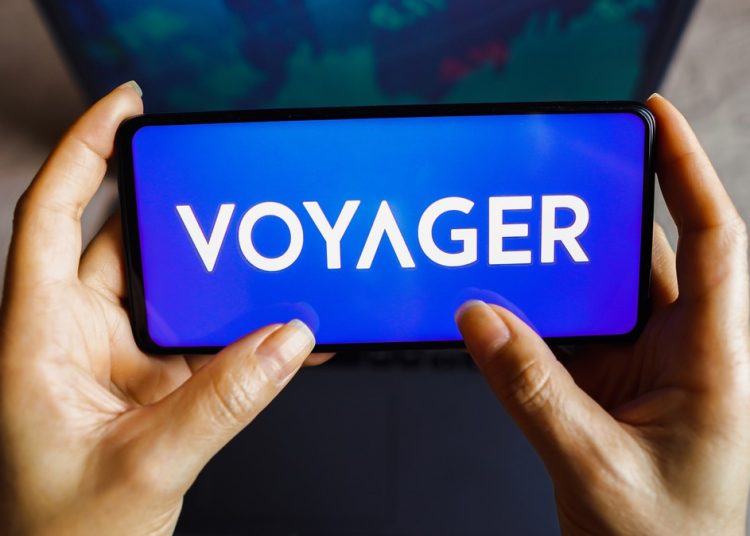 
When Jeffery Cosey, a 37-year-old personal banker in Lansdale, Pennsylvania, first heard about the U.S. crypto brokerage and lender Voyager, he thought it sounded like a better place to keep his money than a traditional bank.

The company had offered him a sign-up bonus, and Cosey appreciated the slick application and the high rate of return on deposits, especially compared to what normal banks could offer. He understood the inherent risks associated with the crypto industry, but felt reassured by the fact that the company was publicly traded in Canada and run by Stephen Ehrlich, a former executive at eTRADE. “They all seemed trustworthy. They all seemed legitimate, not sketchy or fly-by-night or risky,” he told Motherboard.

Over time, Cosey ended up depositing approximately 90 percent of his savings with Voyager, he estimated, split up between Bitcoin, Ethereum, a number of smaller crypto holdings, and USD Coin (USDC), a “stablecoin” that Voyager often reminded customers was “redeemable 1:1 for dollars,” audited by a top accounting firm, and earned “up to 9% annual rewards.”

Now he and other customers are left to guess if they will ever again see the money they had invested in Voyager, a comprehensive crypto platform that allowed people to trade crypto assets, spend crypto in the real world using a debit card, and receive high interest on their deposits, which the company used to make loans to third parties.

Blaming “volatility and contagion” in the crypto markets, Voyager announced this week that it had voluntarily entered the Chapter 11 bankruptcy process. The company had struggled through the crypto winter, as its share price plummeted more than 90 percent. Then, in June, the situation grew worse as the company revealed that it had been unable to recoup more then $650 million it loaned to the crypto hedge fund Three Arrows Capital, or 3AC, which went bankrupt after it made a series of risky and overleveraged crypto bets.

Due to the consequent financial difficulties, Voyager began to have liquidity issues, even after receiving a $500 million line of credit, and announced on July 1 that it was suspending withdrawals and trading, effectively cutting customers like Cosey off from their money.

“I never thought that a publicly traded company would gamble my money away,” Cosey said. “That’s the risk that I didn’t understand.”

Do you have information related to the crypto crash? We want to hear from you. From a non-work device, contact our reporter at maxwell.strachan@vice.com or via Signal at 310-614-3752 for extra security.

Prior to its bankruptcy this month, Voyager had portrayed itself as a responsible elder amid a sea of crypto madness that could nevertheless promise up to 12 percent in annual rewards. Repeatedly, Voyager reminded customers that U.S. dollars deposited on the platform were FDIC insured and crypto could always be converted back into fiat currency. As recently as mid-June, Ehrlich, the CEO, had claimed in no uncertain terms that “customer assets are safe.” On June 14, the company reiterated in a release that it felt Voyager differentiated itself from crypto competitors by taking “a straightforward, low-risk approach to lending,” only working with “reputable counterparties,” and making crypto “simple and safe.”

“We have the experience to back our decisions and weather any bear market,” the company stated then.

Customers now say that they feel they were repeatedly “misled” and duped. “They fooled the customers,” said one Voyager customer who now says he is struggling with depression.

“It’s ruined me,” said a 25-year-old financial adviser in the Chicago area. “I have to start my whole life again.”

Voyager spokesperson Drew Pierson declined to discuss the experiences of the company’s customers with Motherboard, only saying in a prepared statement that Voyager hoped they would one day be able to “resume account access” as a result of the bankruptcy filing.

Under a proposed plan, the company claims, customers will be able to withdraw their U.S. dollars “after a reconciliation and fraud prevention process is completed” with a New York-based bank. Customers’ crypto assets, however, are not FDIC insured, and the company would only say it hoped they would be exchanged for some unspecified combination of crypto, Voyager shares, Voyager tokens, and “proceeds from the 3AC recovery.”

But many customers are doubtful that they will receive all their money back and say they have little interest in Voyager tokens or shares. “The only thing customers want is crypto back—nobody wants the new stock or token,” said Alex, an Austin-based Voyager customer. “Both of those [are] likely going to zero.”

Alex told Motherboard he feels “pissed off.” A member of one of Voyager’s top loyalty programs, Alex has thousands in USDC stuck on a Voyager Debit card and cannot access a “large” percentage of his Bitcoin holdings. He has also lost tens of thousands on his investment in the Voyager token, which the company had promoted as a way to obtain additional rewards and benefits.

“The community has no understanding of what the outcome might be and the worst case assumption is pennies on the dollar,” he wrote in a message to Motherboard. “The impact that they’re having on individuals is huge.”

One such person is the 25-year-old Chicago financial adviser, who said he had put “almost my entire life savings” in Voyager, and that the decision to freeze funds had “destroyed” him both financially and emotionally. Since he became unable to access his funds, he said he has had trouble getting out of bed and is barely eating. He had been in the process of moving to another apartment and now doesn’t even have enough money for the deposit.

“I was dumb enough to trust them,” he said.

Like many others, the Chicago man said he had been drawn to Voyager because it was publicly traded but also offered a high yield on the coins he held.  He believed his money to be safe with Voyager since the company so often touted its low-risk profile and FDIC insurance. Distrustful of traditional big banks, the Chicago man thought a publicly traded crypto financial company would be more transparent.

“I was wrong,” he said. “Voyager was no different and actually much worse.”

Now, the adviser doesn’t trust the company’s claims that he will ever be able to get his savings back. He asked that Motherboard not reveal his identity as he “would probably lose a lot of clients and even potentially lose my job if they found out about this,” he said.

Reddington, a pseudonym, works as a software engineer for a small company in Ohio, where he earns $75,000 a year. He had invested $31,000 with Voyager, money he had carefully saved over five years by avoiding purchasing all but the “essentials,” he said. Now, he said, he is unable to access the money and crypto assets in his Voyager account. “It’s so messed up,” he said. Reddington asked to remain anonymous so that those close to him do not find out about his financial situation, which has led to depression, he added.

“It’s like I am begging them for my own money,” he continued. “It’s so depressing, I’m still unable to process this news and I don’t know what I can do.”

Reddington had moved his money to Voyager from Binance’s U.S. partner exchange after deciding he wanted to keep his money in a completely U.S.-based company, which he saw as more trustworthy. Similar to the others, he went with Voyager since they marketed themselves as a “very safe” company with a “high yield” on USDC. “I trusted them a lot,” he said.

A marketing professional in the Chicago area, who asked that his identity remain anonymous so that his “stupidity” and “naivete” remain unconnected to him, also felt “misled” by Voyager’s heavy promotion of stablecoins.

The marketing professional said he initially approached his crypto investments understanding he could lose it all, promising himself early on he’d never invest more than he could afford to lose. But over time, he was enticed to start “probably pushing the boundaries of what I considered ‘can afford to lose,’” he said.

The reason, he said, related to an innovative “crypto-based” debit card the company had announced in November. The card, which the company said was the first of its kind, held funds in USDC but could  “seamlessly and automatically” convert them into cash to make “everyday purchases.” Customers who used the card could earn customers up to 9 percent in annual rewards. “By basing our debit card on the USD Coin (USDC), a stable coin priced 1-to-1 to the US dollar, we are offering customers a predictable and rewarding way to hold and easily convert crypto for payments,” Ehrlich said.

In late May, the Chicago marketing professional received his new crypto debit card from the company, which convinced him to start loading up on stablecoins. After all, he believed, he could always easily and quickly convert back into U.S. dollars.

“I had near instant access/liquidity to my USDC and therefore felt quite comfortable holding a relatively large amount that could be converted to either USD quickly and/or immediately to cash purchasing power,” he said.

Alex, the Austin-based Voyager customer, said he believes the company marketed itself in an “incredibly inaccurate and misleading” manner by portraying itself as “low risk” and “safe” while exposing customer funds to risky investments through loans to 3AC.

Of particular concern to Alex and other Voyager customers was the $650 million loan to the risk-taking crypto hedge fund 3AC. Cosey, for one, said he was not aware that Voyager was making unsecured loans to crypto hedge funds like 3AC “that were basically gambling,” he said. “I feel like they didn’t treat the money…