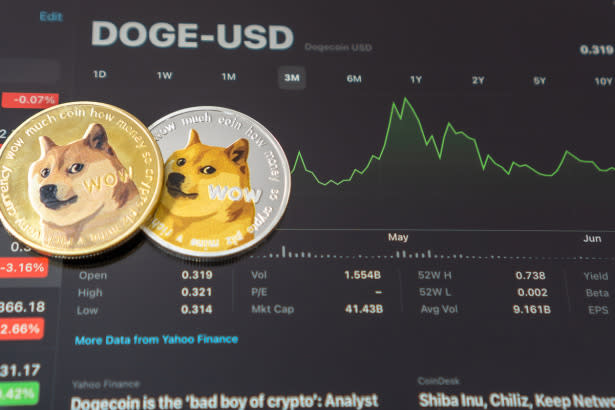 Most major cryptocurrencies are in consolidation mood in thin weekend trade this Saturday. However, for the most part, major cryptocurrencies look set to end the week with solid gains and not far below highs. Sentiment took a turn for the better this week despite a rise in US yields and Fed tightening bets on strong US jobs and service sector survey data.

Bitcoin was last consolidating in the $21,500 area, up around 12% so far this week. That means its market capitalization currently stands at around $413 billion. The cryptocurrency picked up momentum following a breakout of a pennant earlier in the week. It at one point even made it as high as the $22,400s, but was unable to hold onto a $22,000 handle.

Ethereum, meanwhile, was last trading well supported in the $1,220 area, up roughly 14% this week. The market cap of the world’s second-biggest cryptocurrency was last just under $150 billion. Total crypto market cap was last around $935 billion, up roughly 10% or over $80 billion on the week.

Dogecoin was consolidating just under the $0.07 level on Saturday. On the day, the cryptocurrency is about 1.3% higher, whilst its weekly gains are around 4.0%.

Since its failed attempt to get above its 50-Day Moving Average at $0.072 on Friday, the pair has been consolidating amid thin trading volumes. But DOGE/USD continues to respect a supportive uptrend that has been guiding it higher since late June.

That suggests that Dogecoin is likely to retest its 50DMA in the next day or two. However, beyond that and around $0.073/$0.074, resistance in the form of this week’s highs and a long-term downtrend will be a struggle for the bulls to overcome.

Indeed, this is a downtrend that DOGE/USD has been unable to get above since mid-May. If the cryptocurrency does lose momentum in the next few days, that will be taken as a sign that the bearish trend of the last two months is set to continue.

Was DOGE to subsequently break under the above-mentioned short-term support trendline, that would open the door to a drop back towards the low-$0.60s. Beyond that, the Dogecoin bears would likely target a test of annual lows in the $0.05 area.

However, such a drop is unlikely if the mood in cryptocurrency markets remains upbeat, as was the case this week. If that is the case and DOGE musters a break above the long-term downtrend, it could be in for a run higher towards late-June highs near $0.08.

The Shiba Inu bulls remain in control this weekend and are looking to finish a strong week positively. SHIB was last higher by more than 5.0% on the day and trading just under $0.00012, a key area of short-term resistance.

The latest rally means that SHIB is trading higher by about 17.5% this week. That makes it one of the best performing cryptocurrencies in the top 20 by market capitalization this week.

SHIBA/USD appears to have formed an ascending triangle formation over the past few weeks. Such formations often precede bullish breakouts. For SHIB/USD, that would mean a decisive push above $0.000012 resistance.

Granted, the pair would quickly face resistance in the form of the late-May highs between $0.0000125 and $0.000013. But were it able to clear these levels, the door would be open to a run all the way higher to the $0.000017 area. There is very little by way of significant resistance to stop such a move.

This article was originally posted on FX Empire

After Terra’s fall to Earth, get ready for the stablecoin era