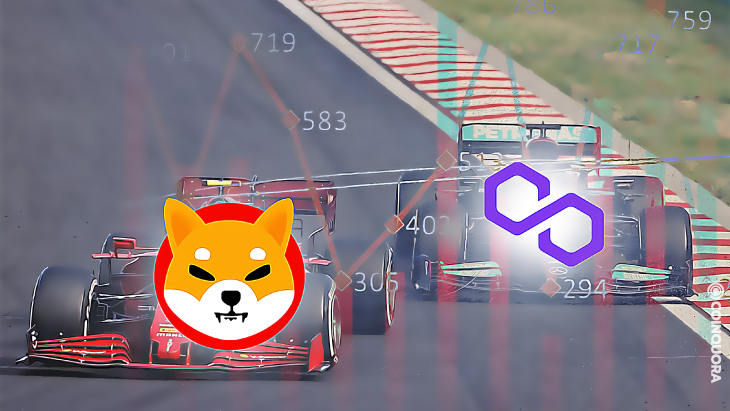 
Shiba Inu, the 14th-ranked cryptocurrency, was one of the top gainers following the weekend sell-offs, with prices currently down by 5.69%. At a present market valuation of $5.66 billion, Shiba Inu has surpassed Polygon’s $4.5 billion to be the 14th biggest coin. However, according to Coinmarketcap data, SHIB has a lower 24-hour trading volume than MATIC.

Meanwhile, despite the recent price drop, Shiba Inu’s holder count continues to rise. According to WhaleStats, the SHIB holder count has grown to $1.619 million, surpassing the FTX token for the biggest holding by dollar.

MATIC, the native asset of the Polygon blockchain, trades upward by 2.85% at a present price of $0.5708 as volatility continues on the crypto market. The cryptocurrency market succumbed to further selling pressure in May 2022 as Bitcoin dipped to lows of $17,500. The majority of altcoins are experiencing significant drops in the last 24 hours. At press time, many top 100 altcoin tokens lost between 20% and 50% in the past seven days.

Shiba Inu, like the rest of the market, had significant sell-offs on Friday and Saturday, but Sunday provided a much-needed reprieve. The latest increase suggests a flourishing community, which is good news. While the rise in holders might not immediately impact the price, it may indicate long-term interest in a cryptocurrency. The cryptocurrency is currently trading at $0.00001037, down by 5.46% in the last 24 hours, according to CoinMarketCap data.

Looking ahead, it is worth noting that SHIB has not seen a substantial price increase in almost two months, increasing nearly 1000% in October, but the currency has mostly been confined to lower lows and low highs since then.

Bitcoin [BTC] holders should know that the bottom is…