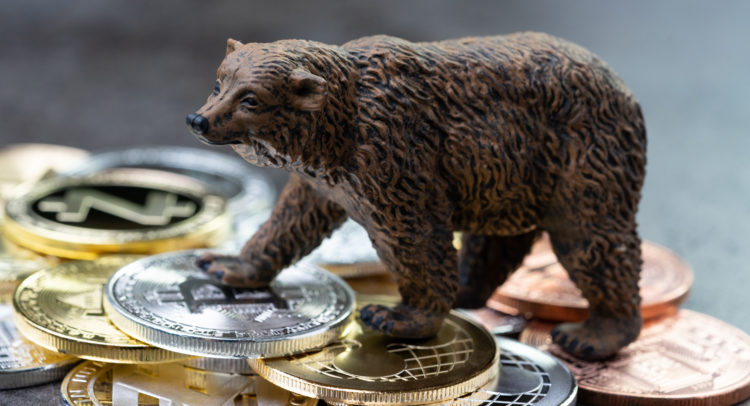 Bitcoin (BTC-USD) faced a temporary pullback yesterday as anticipation that the U.S. Federal Reserve will raise rates is climbing amid soaring prices. Following the U.S. Bureau of Labor Statistics’ announcement that CPI (Consumer Price Index) rose by 9.1% – the largest 12-month increase in over 40 years – BTC’s value fell below the $20,000 support level.

More importantly, BTC lost nearly $15 billion from its total market capitalization within 10 minutes, falling from around $379.91 billion to $364.55 billion, as the news of the negative CPI report started gaining mainstream attention.

The liquidation of Three Arrows Capital (3AC) and the recent bankruptcy filing by Celsius have further pushed investors into the “extreme fear” territory, leading to a massive outflow of BTC across exchanges.

The good news is that there’s been a massive spike in the yearly high for BTC’s Social Dominance metric. A new report from Santiment indicates that since June 2021, the ratio of discussion of bitcoin against other cryptocurrencies skyrocketed across social media platforms.

The troubles of the expansive altcoin ecosystem don’t seem to be fading. Fresh from promising gains of the previous week, the value of Ethereum (ETH-USD) dropped by around 8.5% this week. ETH has been trading range-bound for quite some time, facing strong resistance at $1,100.

However, investor sentiment is improving as the much-talked-about “Merge” draws nearer. According to recent data from Glassnode, the number of addresses holding more than 10 ETH tokens has reached its 16-month high.

The report also states that the total ETH deposited in the ETH 2.0 contract has now surpassed 13 million – nearly 10.9% of the total circulating supply.

Among the large-cap altcoins, Binance Coin (BNB) and Ripple (XRP) registered moderate losses this week, less than 2% and 5%, respectively. At the same time, Cardano (ADA) lost around 7.9% of its value, despite the growing buzz around its upcoming Vasil hard fork and a large increase in developer activity.

Solana (SOL), too, lost around 8% of its value over the past seven sessions, primarily due to the class-action lawsuit filed against the layer-1 blockchain in California by SOL investor Mark Young.

While the broader market is moving sideways, Polygon (MATIC) registered a promising comeback this week. The value of MATIC has surged by nearly 18.4% over the past seven sessions after the platform announced it was selected to join Disney’s 2022 Accelerator Program.

According to Disney, Polygon and other selected companies will collaborate on innovations across the augmented reality (AR), non-fungible token (NFT), and artificial intelligence (AI) spaces.

One of the biggest gainers of this week is Aave (AAVE). The value of the AAVE token jumped more than 20% this week as liquidated Celsius Network repaid its debt to Aave. Another small-cap token, Quant (QNT), jumped nearly 50% this week.

As more projects focus on the ability of blockchains to communicate with each other (interoperability), Quant is well-positioned to address the demands, triggering demand and the subsequent appreciation in QNT.

Although prices for digital land in metaverses have been stumbling in tandem with the rest of the market, lifestyle company Playboy (PLBY) has partnered with The Sandbox to launch a digital version of its Playboy mansion. The Playboy team aims to launch the Playboy MetaMansion game with NFT integrations through collaboration.

In financial services news, Mastercard (MA) has partnered with Indonesian crypto gateway provider Fasset. Through this partnership, both platforms will work together to co-develop digital solutions to accelerate financial inclusion in Indonesia.

Finally, in adoption news, China’s biggest city, Shanghai, has expressed a keen interest in focusing on innovations like blockchain, NFTs, Web3, and the metaverse.

To that extent, the Shanghai Municipal Government has published a draft of its 14th Five-Year Plan for the Development of Shanghai’s Digital Economy to facilitate entrepreneurship across these sectors.

Why Bitcoin, Ethereum, and Polygon Jumped Today | The Motley Fool

Why Bitcoin, Ethereum, and Polygon Jumped Today | The Motley Fool