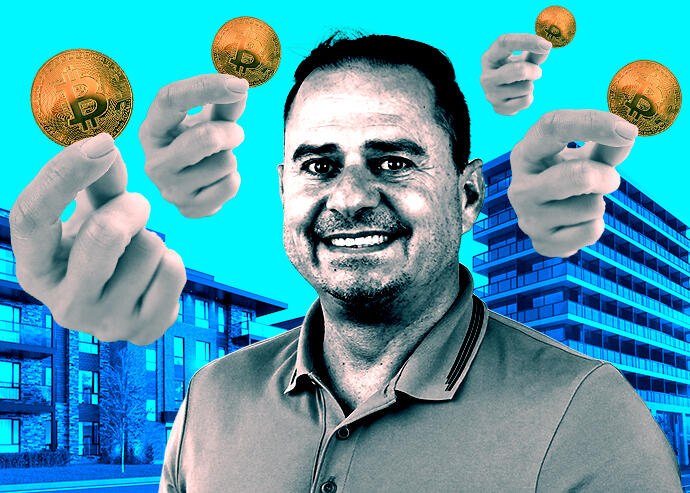 Canadian developer Ray Junior Courtemanche, a former professional stock car racer, says “the timing was right” to accept cryptocurrencies for a condo project near Montreal. He might want to do some more research next time.

Courtemanche said in a news release last week that he teamed up with Dello, a Montreal fintech company, to process crypto payments for units at SKYBLÜ Condos, 30 miles north of the city. His announcement came after the global crypto market lost almost $2 trillion in value since November, costing the jobs of about 1,700 crypto exchange employees in June alone.

“I was just waiting for a simple and effective way to be able to accept crypto, and today, the solution exists and it’s from Quebec!” he said in the statement punctuated by three exclamation points. “At this point, I was sold on that idea,” he said, adding, “Lots of people would benefit from crypto and blockchain technology, including those in real estate.”

While public awareness of cryptocurrency is growing, the market is shrinking, a downturn that’s lasted all year and got even worse last month.

The price of Bitcoin, the most recognized crypto currency, dropped 38 percent in June to less than $20,000, according to Forbes, bringing its year-to-date loss to 60 percent. Another currency, Ethereum dropped more than 42 percent last month to under $1,100, erasing half its value since the start of the year.

Crypto payments are slowly being embraced in American real estate. In January, a crypto investor paid $7 million for a condo unit in downtown Miami. It was the second-highest cryptocurrency sale in Miami, trailing a $7.2 million one last summer and a penthouse at Arte in Surfside that sold for $22.5 million in digital tokens in 2021.
$22.5 million penthouse

How Much Does It Cost to Mine 1 Bitcoin? – Decrypt

How Much Does It Cost to Mine 1 Bitcoin? - Decrypt