Banned in Boston City Hall: Here’s what you can’t do on the city’s public WiFi 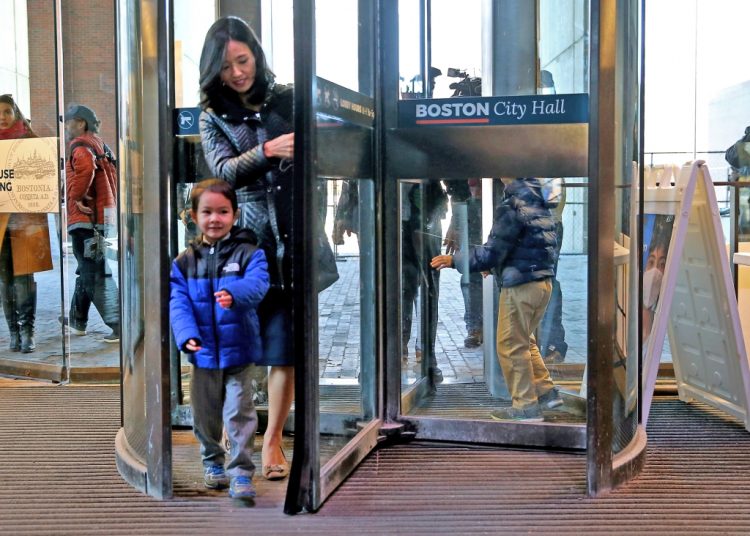 
Despite the city labeling its WiFi as “Wicked Free,” there are actually quite a few restrictions — so don’t expect to be able to get your cryptomining, “adult material” or “weapons/bombs” information.

The “Wicked Free WiFi” is the public wireless internet access in Boston City Hall — a place whose employees didn’t have answering machines until the Walsh administration — and the surrounding Government Center area, so that’s how employees and visitors to the often-maligned brutalist lump downtown use wireless internet.

While the quality of the publicly provided and passwordless service varies by where in or around the thick concrete structure you are, the city-imposed limit on what you can view remains.

The city said there’s no specific list of URLs that are banned. Rather, the city chooses “categories” of site that are banned, and a third-party vendor then uses those to filter out sites in bulk. For a particularly G-rated example, the city bans “Sports,” which is a category under the class of “Productivity Loss,” so anything the filter has marked as sports can’t make it through, such as NBA.com or ESPN.com.

A city-provided spreadsheet thankfully shines some lights on the often-bizarre details.

The first of those, the security risks, include many common-sense bans including spyware or malware, spam, “suspicious content” and “malicious content.” Sadly for the Bitcoin fans in City Hall, it also includes “Cryptomining and Blockchain,” a category it defines as “Sites that allow cryptocurrency mining network traffic and scripts.”

Where things get weird is among the “General Surfing,” “Productivity Loss” and, particularly, “Legal Liability” classes.

Among the latter of those are where the “superclasses” of “Adult Material,” “Drugs,” “Gambling” and — ominously — the “Illegal or Questionable” come home to roost. As one might expect, there’s a category simply called “Pornography,” which is defined as “Sites related to soft- and/or hard-core pornography, regardless of medium.” So no “Sex.com,” for example.

There’s also the category of “Sexuality” which appears, counterintuitively, to center around tattoos. And then there’s the category of “Social Networking Adult” — dating sites, for which the city offers up the example of “ashleymadison.com,” a dating site for people looking to have affairs.

Also under “Adult Material” is “Adult Sex Education,” “K-12 Sex Education,” “Nudity” (“Sites that provide either artistic or non-artistic nude images”), “Lingerie/Bikini” and “Adult Themes,” which is described as a catch-all consisting of “for example, penile enlargement, erectile dysfunction, adult entertainment, and so on.”

More bad news for the denizens of City Hall: “Marijuana” and “Other Drugs” are both banned under “Drugs.”

Under “Illegal or Questionable” are quite a few things that certainly aren’t the former, including proxy sites that help people get around site blockers like this one, plus “Mature Humor” and “Profanity.” The example offerings from the city on that last category include the incredibly named babyfight.com and blowwboston.com, the latter of which doesn’t currently exist and the former of which is just a blog.

Under the “Questionable” category are “Sites that are generally related to illegal activities but do not fall under a more specific category,” for which the city gives the examples churchofsatan.org and satanicchurch.com, neither of which are illegal.

Other categories under “Legal Liability” include “Militancy/Hate and Extremism,” “Tasteless,” “Violence” and “Weapons/Bombs.” Under tasteless, one example is “gore2gasm.com”, another eye-catchingly named site that at least currently does not exist.

Read More:Banned in Boston City Hall: Here’s what you can’t do on the city’s public WiFi